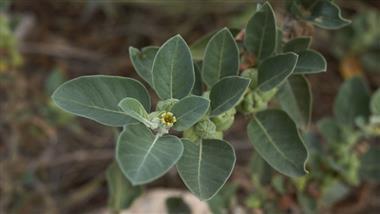 Ashwagandha (Withania somnifera), also known as winter cherry or Indian ginseng, is a popular herb in Ayurvedic medicine.1 Its name translates to “odor of horse” because of the distinct horse-like smell that its root emits. Some accounts also say that the herb was named for its ability to give you the endurance and strength of a horse.2

In Ayurvedic medicine, ashwagandha herb is classified as “Rasayana,” a type of essence that “promotes a youthful state of physical and mental health and expands happiness.”3

The ashwagandha plant belongs to the Solanaceae family, the same as tomatoes and eggplants.4 It’s a small shrub with distinct red berries and five-petal flowers.5 However, the most important part of the plant is the root, which can be extracted for use as a powder in tonics and tinctures. But what is ashwagandha good for?

In addition to helping improve bodily function, it may positively impact your immune system,6 your ability to deal with stress and your cognitive responses7 as well.

As an Ayurvedic herb, ashwagandha offers numerous benefits when ingested or used as a medicine. The different parts of the ashwagandha plant have various medicinal purposes. Bitter ashwagandha leaves are used to help alleviate fever and swelling. In ancient Ayurvedic medicine, the root is crushed and made into a paste that’s used to help treat ulcers, boils, pimples and flatulent colic.8

Other ashwagandha root benefits include acting as a diuretic and as a remedy for constipation9 and insomnia.10 Ashwagandha seeds, on the other hand, are used in India to coagulate milk.11

Ashwagandha root extract, together with the berries of the plant, is used for the production of tonics and capsules, and can also be used to make tea.12 Ashwagandha may help improve your immunity,13 and has shown potential in helping with the following health concerns:

How to Use Ashwagandha

While ashwaganda comes in many forms, ideally you should buy organic ashwagandha to avoid the possibility of ingesting pesticide residues and other harmful chemicals used in conventional farming.22

Ashwagandha root powder can be used topically as a poultice to help treat wounds, ulcers, boils and other skin infections.23,24 If you want to consume ashwagandha powder to maximize its healing uses, here is a recipe from CureJoy for ashwagandha tea with milk and cardamom.25

Ashwagandha Tea With Milk and Cardamom

• Wait for it until the mixture is reduced to about 1/2 cup.

• Ward off infections — Ashwagandha contains steroidal lactones called withanolides, which may help combat infectious agents.30 Researchers are even studying the potential of withanone in ashwagandha to inhibit the infectivity of the novel coronavirus, although these findings are not yet conclusive.31

“The hallmark of aging is associated with telomere; the progressive attrition of telomere in human beings contributes to mortality in several age-related diseases.

… [W]e evaluated the enhancement of the telomerase activity, which is to maintain the telomere by adding the hexanucleotide repeats, by an ancient Ayurvedic herb Ashwagandha root extract.

Indeed, Ashwagandha root extract powder, at a concentration of 10 µg – 50 µg/ml, increased telomerase activity by ~45%, in the Human HeLa cell line upon 72 hrs. exposure, as determined by the TRAP assay.”

Ashwagandha oil is another form of ashwagandha that offers a wide variety of medicinal and practical uses. It’s made from the roots through steam distillation and is usually mixed with other essential oils (or diluted in a safe carrier oil) to assist with illnesses and diseases.34

If you’re using ashwagandha oil topically, make sure to dilute it in a carrier oil such as coconut or almond oil. You should do a skin patch test to see if any allergic reactions occur, and consult your physician before ingesting it.

Do You Want to Plant Ashwagandha?

The ashwagandha plant typically grows in hot and humid climates like India, where it originates, and is quite tolerant to dry soil once the plant is established. To grow your own ashwagandha, make sure to follow these tips from Balcony Garden Web:35

• Your soil should be sandy and well-draining. It’s best to plant your seeds in a sunny part of your garden. It is nearly impossible to grow ashwagandha in a waterlogged environment that doesn’t drain.

• The plant should not be watered all the time, and should be watered only when it seems “thirsty.”

• The ideal growing temperature is between 70 and 95 degrees Fahrenheit. In colder temperatures, the plant will grow at a much slower pace. The ashwagandha plant should be fully grown in about 150 to 180 days.

Side Effects of Ashwagandha and Other Contraindications

If you’re suffering from any health problems, you should consult with your physician before taking ashwagandha orally. You should also moderate your consumption, as side effects such as diarrhea, stomach upset, nausea and vomiting could occur, particularly after ingesting high doses.36 This herb can also cause excessive drowsiness when taken with a mild sedative.37

Ingesting ashwagandha during pregnancy or while breastfeeding should also be avoided, as it could have an effect on your child.38 There are also claims that it could cause a miscarriage, so it’s better to avoid using this herb during your pregnancy.39

Like other herbs and spices, ashwagandha offers a broad variety of benefits and uses, but it should always be used in moderation. Remember, anything taken in excess — even something as beneficial as ashwagandha — may have negative effects on your body.