Yarrow: The Herb That Heals Wounds, and So Much More 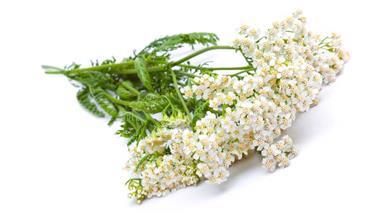 According to Greek mythology, whenever the mighty warrior Achilles became injured in battle, he used the yarrow herb to help heal his wounds faster, and even covered his body with a tincture made from the leaves to stay invincible against arrows.1 Even his loyal soldiers used it, too.2

It’s no wonder that when it comes to medicinal plants, yarrow stands out as a top remedy to stop wounds from bleeding. But the usefulness of yarrow does not stop there. Keep reading to learn how you can benefit from this versatile herb.

Yarrow is an aromatic perennial plant from the aster or Asteraceae (Compositae) family, a close relative or chamomile and chrysanthemums.3,4 Its scientific name, Achillea millefolium, was coined from the Greek hero who loved using it, as well as for its many leaves (“Millefolium” means “a thousand leaves,” which refers to its very small feather-like leaves).5

The yarrow plant is also known by many other names, such as carpenter’s weed, bloodwort, knight’s milfoil, old man’s pepper, staunchgrass and nosebleed, to name a few.

Aside from its wispy leaves, another distinguishing characteristic of yarrow is its blossoms. Yarrow flowers are tiny and grow in flat-topped composite clusters at the top of the plant’s stems. They flower from June to October, and are either rose- or lilac-colored or white.

Yarrow originated from Europe, but eventually made its way to North America through early colonists. It can now be found growing everywhere — wild in fields and meadows, in gardens and along roadsides.6

The Benefits of Yarrow Go Beyond Healing Wounds

The medicinal benefits of yarrow herb have been known for a long time. Native American tribes like the Cherokee, Iroquois, Gosiute and Mohegan used it to as a digestive aid, while the Micmac of New Brunswick, Nova Scotia and Maine used the stalk to alleviate colds and “break” fevers.7

Yarrow stalks can also be pounded and made into pulp that’s applied to swollen body parts, bruises and sprains.8 But in fact, all parts of the plant have medicinal applications, and the herb can be taken internally or used externally. Here are some of the many medicinal uses for yarrow:9,10,11,12

• Helps fights bacteria and viruses — Drinking a tea made from yarrow, elderflower, linden, boneset, peppermint and ginger can promote sweating and help eradicate flu-causing viruses from your body.

• Promotes digestion and detoxification — Yarrow’s bitter components and fatty acids encourage proper bile secretion from the gallbladder, which can then improve digestion and keep gallstones from forming.

• May be effective against skin conditions, such as eczema14 — Not only can it help stop wounds from bleeding, but it can be used as first aid for ulcers.

• Relieves pain from arthritis and rheumatism — It has anti-inflammatory properties that may alleviate pain brought on by these conditions.16

• Helps relieve hemorrhoids — Drinking yarrow tea or tincture or placing a yarrow poultice or compress over the affected area may soothe this health problem.17

According to Mother Earth News, the reason why yarrow is such a versatile, healing herb is: “[I]t works to tone the blood vessels, especially the smaller veins, and lower blood pressure by dilating the capillaries. This means it has a beneficial whole-body effect through the blood system, especially on conditions related to hypertension and including coronary thrombosis.”18

Before applying yarrow topically or ingesting it, consult your health care provider, especially if you are suffering from any health problem, to ensure that this herb is safe for you to use.

Did you know that yarrow can be used cosmetically, too? Infusing it into your hair cleansers may help stimulate hair growth.19 Rubbing fresh yarrow juice on the scalp may also help curb excessive hair loss.20

A 2011 study published in the International Journal of Cosmetic Science also found that yarrow extract significantly improved the appearance of wrinkles and pores compared to a placebo, showing its potential as an ingredient in cosmetic applications.21

You can also use yarrow for your culinary needs. The wispy and tender leaves, plucked fresh from the plant, can be added to salads, soups and egg dishes.22 The Haida living in the Queen Charlotte Islands were known for drying butter clams on yarrow stalks. They believed that this gave the shellfish a pleasant taste.23

Before Using Yarrow in Recipes, Keep These Tips in Mind

Remember that yarrow is a soft herb, not unlike tarragon — in fact, these two can be substituted for each other. In his website Forager Chef, Minnesota-based chef Alan Bergo gives some easy pointers on how to use yarrow for cooking:24

• Mixing yarrow with other soft herbs like chervil and parsley will slightly “dilute” its strong flavor.

• Yarrow and high temperatures do not mix well for two reasons: The high heat not only destroys the herb’s delicate flavor, but will also impart bitterness onto your food.

• Ideally, it’s best to add this herb at the end of the cooking process, allowing it to be heated for a few moments, but without actually “cooking” it. Never season a food with yarrow and then cook it after, as this will destroy its flavor.

• Yarrow works great in cold preparations, such as for making gravlax (as a dill replacement) or added to vinaigrettes.

• The herb is naturally sweet. It blends well in desserts like sorbets and complements the flavors of fruits like plums, peaches and nectarines.

• Don’t add yarrow to your homemade broth because it will make the broth extremely bitter.

Another great way to enjoy yarrow is to transform it into tea. The benefits of yarrow tea are known for various illnesses, such as for alleviating congestion and bringing down high fevers. Here’s an easy recipe you can try:25

Growing Yarrow: How to Cultivate It at Home

• Yarrow grows best in hot and dry conditions, and cannot tolerate wet soil. Before planting, make sure to loosen the soil in your garden, about 12 to 15 inches deep and then add in a 2- to 4-inch layer of compost.

• Yarrow is best planted in springtime. However, if you use tip cuttings to plant yarrow, they can be planted in early summer.

• Make sure you allow 1 to 2 feet of space between each yarrow plant, as this herb spreads quickly and can be invasive. Yarrow plants can grow about 2 to 4 feet tall.

• Once the plants are growing well, don’t forget to add in a thin layer of compost and a 2-inch layer of mulch around them every spring.

• Watering your plants regularly is important, especially if you get less than an inch of rain a week during summertime.

• Divide the yarrow plants every three to five years. Lift the flowers in early spring or fall and take out any dead stems from the clump’s center. These divisions can be replanted in well-prepared soil.

Another Way to Reap This Plant’s Benefits: Using Yarrow Oil

One of the most popular forms of yarrow used today is yarrow oil, which is extracted from the dried plant through steam distillation. This essential oil has a sweet, herbaceous and penetrating smell, and a vivid blue color. This color is mainly due to the chamazulene chemical that is released from the plant during the heating process.27

Just like the plant itself, yarrow oil is notable for its multiple healing effects, particularly for circulatory disorders, skin conditions and digestive ailments. It is mainly used in vapor therapy or added to a massage oil or safe carrier oil before being used topically.

There have been reports of allergic reactions and photosensitization among sensitive individuals from using yarrow and yarrow oil, although the exact reason for these have not been determined.28 To be safe, do not use it for extended periods of time and do a skin patch test before applying this oil to any part of your body.

Be Aware of Yarrow’s Side Effects

Despite its bodywide benefits, remember that yarrow may have potential side effects for some people. If you’re allergic to any member of the aster family (chrysanthemums, ragweed and daisy are some examples), do not ingest or apply yarrow topically, as you may have allergies to it as well.29

Yarrow may also make your skin more sensitive to sunlight, so be cautious when using it, whether in plant or essential oil form. Pregnant women and breastfeeding mothers should also refrain from using yarrow, as this herb may induce a miscarriage and may have unknown effects on an unborn child.30