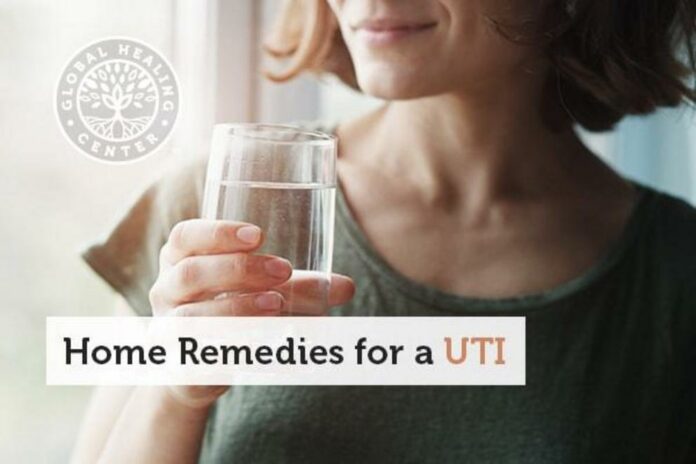 If you get a burning sensation when you’re urinating, it could signal a urinary tract infection (UTI). “Feeling the burn” is a good thing when you’re lifting weights or on a long run, but not when you have a UTI.

In addition to traditional treatments, many UTI home remedies — like taking probiotics, drinking plenty of water, and drinking cranberry juice — may help. Better yet, these home remedies may prevent you from getting UTIs in the first place!

UTIs are one of the most common health complaints, responsible for lost work and school days — and just plain misery. Urinary infections are one of the top reasons that people see a doctor — and yes, men can get UTIs, although they’re more common in women.

More than half of women will have at least one urinary infection at some point during their life.[1] More than 150 million people get UTIs each year.[2]

What Is a Urinary Tract Infection?

UTIs occur when microbes, usually bacteria, cause an infection in any part of your urinary tract, which includes the urethra (a tube that drains the urine from the body), the bladder, the ureters (two tubes that connect the kidneys to the bladder) and the kidneys.

Most UTIs occur in the bladder and urethra, and, if not treated promptly, can travel upwards to the kidneys, where it may become more serious. An infection of the bladder alone is called cystitis.

In most cases, a bacteria called Escherichia coli (E. coli), causes the infection, although rarely, it’s caused by a virus. While many E. coli strains are harmless and found inside the intestines, when these bacteria enter the urinary tract, they can cause infections.

Did you know that 150 million people get urinary tract infections each year?

The symptoms of UTIs are hard to ignore. They range from the classic stinging or burning when urinating to strong smelling or cloudy urine. The most common symptoms include:[1]

If you think you have a UTI, it’s important to see a healthcare practitioner and give a urine sample.

Identifying the cause of your symptoms promptly is essential because other concerns, such infection of the vagina or vulva, can cause similar symptoms. Also, not caring for a UTI may lead to worsening symptoms or a more serious kidney infection.

Throughout history, natural health practitioners have turned to natural remedies to help urinary tract symptoms and science has backed up some of these. Below, we list several natural ways to relieve symptoms, and better yet, avoid UTIs in the first place.

Never use douches, feminine hygiene sprays, powders, and anything that contains perfumes in the genital area; these often do more harm than good.[3]

During your menstrual cycle, use sanitary pads instead of tampons: some experts believe tampons may promote urinary tract infections.[1]

It’s best to take showers instead of baths and avoid bath oils if you have an infection or are prone to frequent UTIs. It’s also a good idea to wear loose-fitting clothes and wear cotton underwear, changing them at least once a day.

Probiotics, “good” bacteria in your intestinal tract, help urinary tract health by creating a balanced, healthy ecosystem of gut microbes, which affect many other parts of your body.[4, 5] When you have a healthy gut ecosystem, the good microbes help fend off the bad ones.[4, 5]

Unlike antibiotics, which kill both good and bad bacteria, probiotics promote the growth of good bacteria. In a study of recurrent UTIs in children, probiotics and antibiotics worked together more effectively than antibiotics alone.[6]

Aim for the Lactobacillus strains — they’re the most effective for UTIs!

Certain strains of Lactobacillus are particularly helpful for urinary health — specifically L. plantarum and L. paracasei, especially when used together with cranberry and D-mannose.[4, 5]

You can get probiotics from supplements or probiotic foods, like kimchi, sauerkraut, and nut milk yogurt.

Keeping the bladder flushed can help keep your urinary tract healthy. Drink lots of water and other fluids to flush the urinary tract. While you should drink half your weight in ounces every day, this rule of thumb is particularly critical when you have a UTI — or if you are prone to getting them.

If you’re properly hydrated, your urine color will be either light yellow or clear!

In a study of 141 girls, not drinking a lot of water and urinating infrequently were linked to repeated infections.[7] When you have to go, go! And drink enough liquid daily to keep your urine color light yellow or almost clear.

Keep your UTIs at bay with the potent vitamin C!

The jury is out on vitamin C; some studies say this immune system booster helps protect against UTIs, while others say it doesn’t.

In one study of pregnant women, UTIs were less likely in women taking vitamin C every day; the researchers recommended taking extra vitamin C to keep UTIs at bay.[8]

Vitamin C — also called ascorbic acid — may help because it makes the urine more acidic, making bacteria less likely to grow. Not all studies show a benefit of vitamin C on UTIs, however.[9]

Generally speaking, vitamin C is a good all-around tonic for your immune system, and it has strong effects against harmful organisms.[10] You can take a supplement or get vitamin C from foods like strawberries, kiwi, green peppers, and citrus fruits.

Cranberries and cranberry juice is often used to prevent UTIs. It’s thought to keep bacteria from sticking to the lining of the urinary tract.[11]

Wow! Pretty interesting that cranberries can keep bacteria away from your urinary tract lining.

Some research, particularly animal studies, has indeed found that cranberries, and specifically the sugar they contain (D-mannose), may help reduce the symptoms of UTIs.[4]

One study also found that women who regularly drank cranberry juice or took cranberry tablets had significantly fewer UTIs yearly than those who did not.[12]

Given the positive studies on cranberries, it might not surprise you to know that scientists have isolated a compound in the berries that may prove helpful for urinary conditions, D-mannose.

This plant sugar prevents bacteria from sticking to the urothelium, the thin layer lining the urinary tract walls.[15] A pilot study found significant improvements in UTI symptoms when women took the D-mannose for up to ten days.[15]

You can buy D-mannose as a standalone supplement, or get it in the following foods:

D-mannose will be more highly concentrated in supplements than the natural fruits it occurs in. It’s mostly safe but may cause loose stools or bloating in some people; in high doses, it may affect the kidneys.

Now, this might be the dynamic duo you’ve been looking for when dealing with a UTI!

Bearberry leaf, a botanical supplement also known as uva ursi, has been used for centuries as a folk remedy for urinary issues.

One small study found that when women at risk of recurrent infections took dandelion and bearberry together for one month, their incidence of repeated UTIs decreased, compared with women taking a placebo.[16]

How might this work? Uva ursi has antibacterial compounds while dandelion increases urination, which helps to purge the urinary tract. Dandelion’s potential side effects include allergic reactions, and it can also interact with some medications, including Ciprofloxacin, lithium, and diuretics, so talk to your healthcare provider if you take any of these.

Although there hasn’t been much research on the effects of apple cider vinegar on UTIs specifically, it’s not likely to harm you, and it just may help.

Studies have found that apple cider vinegar fights E. coli bacteria — as well as other harmful microbes — and also reduces markers of redness and swelling in the body.[17]

This probiotic-containing vinegar has been a home remedy of choice for UTIs among some natural health advocates. Try adding a splash to water, cranberry juice, or green tea.

What Not to Do to Prevent a UTI

While many things show promise in keeping UTIs at bay or helping symptoms, other home remedies don’t work and may be dangerous. In addition, there are some foods you can avoid eating if you are prone to recurrent infections.

Because baking soda is a base — meaning it’s low on the pH scale — some people believe that dissolving it in water and drinking it is an effective remedy for UTIs. But there is not much research to support this practice and some people have even experienced baking soda poisoning from consuming too much.

Since no studies have looked at this and some evidence suggests that it may harm you, we suggest you avoid it as a home remedy.

Although a special diet won’t stop UTIs from happening, it helps to avoid irritating foods when an infection strikes. Avoid these foods, which affect the bladder and urinary tract health:[18]

UTIs occur more frequently in women due to female anatomy. Women have a shorter urethra, which minimizes the distance bacteria must travel to reach the bladder. Also, in women, the urethra is closer to the rectum, where more “bad” bacteria live.

UTIs often occur after frequent sexual activity because it’s easier for bacteria to enter during sex. Using a diaphragm, spermicides, and unlubricated condoms can irritate the urethra and increase your risk of getting a UTI.

Blockages in the ureters, bladder, or kidney — including kidney stones or an enlarged prostate gland — can also trigger UTIs. Other risk factors for UTIs include:

Urinary tract infections are the most frequent cause of bacterial infection in women, although they also occur in men. UTIs typically cause burning and pain and the frequent urge to urinate, along with other symptoms.

While antibiotics are the conventional treatment, some people use home remedies to help keep them away or to relieve symptoms. Popular home remedies for UTIs include proper hygiene before and after sex, cranberries and cranberry juice, certain probiotics, apple cider vinegar, D-mannose, or bearberry (uva ursi) and dandelion combined.

Whether you have a UTI or are prone to recurrent UTIs, it pays to avoid certain foods and to practice habits that prevent UTIs. Good habits include urinating when you need to; avoiding douches, powders, and sprays in the genital area; avoiding irritating contraceptives; and wearing cotton underwear and loose-fitting clothes.

The Root of Autoimmune Disease can be Found in the Gut