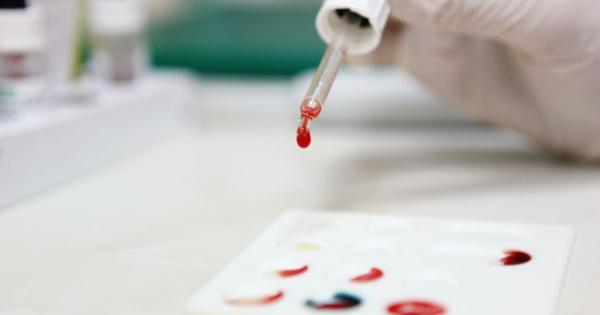 This article is copyrighted by Jeffrey Dach MD, 2013
Republished with permission from JeffreyDachMD.com 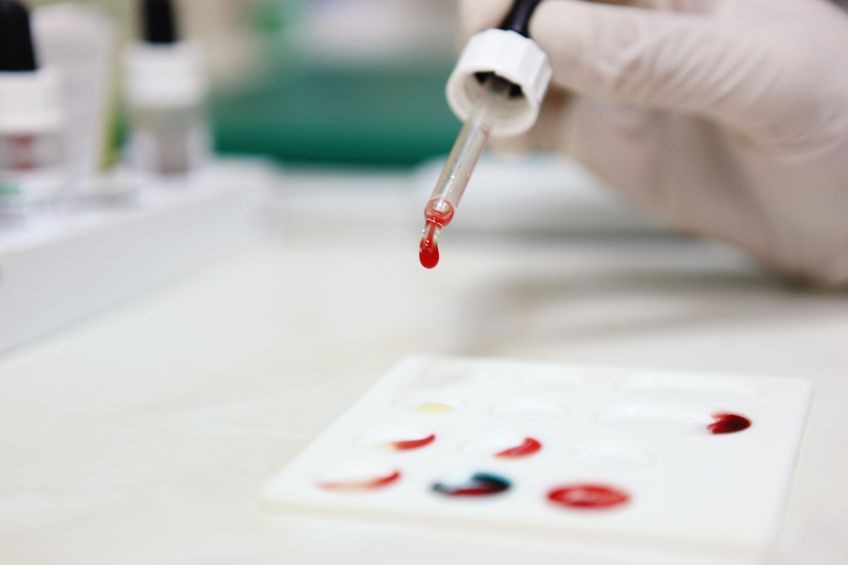 A Case of an Elevated PSA

Jim’s PSA test showed an elevated PSA of 4.7 (normal is less than 4), so Jim was sent over to a local urologist office all set for a needle biopsy of his prostate.

Working as an interventional radiologist for many years, I actually pioneered ultrasound guided prostate biopsies, and taught many urologists how to do the procedure.  This procedure involves placing an ultrasound probe into the patient’s rectum to image the prostate, and advance a long needle into the prostate gland for the tissue sample. (Repeated a number of times).  As uncomfortable as it sounds, it’s really all not that bad.

Thinking the rush to biopsy was a bit hasty, Jim declined, and instead came to my office seeking a second opinion.  After a brief chat, Jim complained of recent urinary symptoms.  Sure enough, his lab findings indicated a simple infection of the prostate gland, which is quite common.

Inflammation and prostate infection is a common cause of PSA elevation.  The plan was to treat Jim with antibiotics for his prostate infection and repeat the PSA test.  After a few weeks of daily Ciprofloxin, Jim was smiling ear-to-ear because his repeat PSA was back down to 3.8 and his doctors no longer advised prostate biopsy.

PSA is Prostate Specific Antigen, a protein discovered in 1986, and a marker for prostate cancer and inflammation. This article will show you that PSA screening for prostate cancer is, in fact, a 20 year failed medical experiment which provides little or no benefit in saving lives.

Gina Kolata of the New York Times wrote a scathing indictment of PSA screening citing two studies published from March 2009 New England Journal of Medicine, considered the most important studies in the history of men’s health, wherein PSA was shown to actually increased mortality. Below is a chart of PSA Screening and Mortality From NEJM PLCO study. 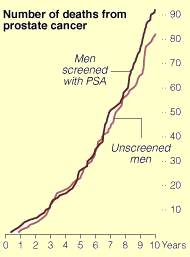 The large US study, the PLCO, showed no mortality benefit from PSA screening. (see chart above).  The Europeans, on the other hand, did much better.  Their ERSPC study provided a 20% mortality reduction from PSA screening.  However, this came at a high cost of significant overdiagnosis.  Fifty men were treated for prostate cancer unnecessarily for every life saved. This treatment of surgery, radiation and hormonal castration is associated with erectile dysfunction (ED) and incontinence.

One Million Male Victims – OverDiagnosed and Overtreated Since 1986

Welch reported a very unpleasant finding in the August 2009 issue of the Journal of the National Cancer Institute. Since the invention of the PSA test in 1986, one million men have been treated for a clinically insignificant prostate cancer that did not require treatment.  These are 1 million male victims, many suffering from side effects of treatment, such as erectile dysfunction and incontinence.

Take a look at the charts below which Welch used to arrive at his conclusions.The upper brown data line shows annual incidence rate of prostate cancer, (the incidence).  The lower chart shows mortality, which was stable at 30,000 deaths per year. Notice the huge spike in detected cases when PSA testing was introduced (red arrow). Notice the INCREASE in Mortality in the lower chart (blue arrow) the same years as a spike in Incidence from PSA testing. The two peaks coincide (vertical green line connects the two charts at the peaks). Granted mortality declines afterwards, from 33,000 per year to 24,000 per year, but at a huge cost.  We  have eradicated 10,000 advanced prostate cancer cases per year in return for a huge price paid in degrading the quality of life for 1 million men overdiagnosed and overtreated for insignificant disease. Below is a chart of prostate cancer incidence and death rates in the US. 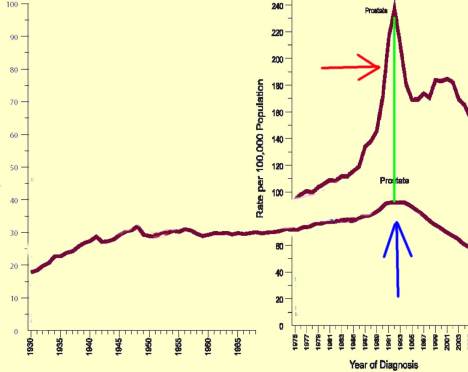 Another series of papers just released in the British Medical Journal Sept. 24 2009, again criticizes mass PSA screening, advising against it.  Another highly critical article, just published in the Archives on Internal Medicine by Dr Kirsten Howard from the University of Sydney’s School of Public Health, showed that PSA Testing is not a major factor in prostate cancer mortality, and “many men with screen-detected prostate cancer are having cancer therapies for clinically insignificant cancers”.

Why Doesn’t It Work? Where Did We Go Wrong with PSA Screening?

PSA screening programs send the screened patients to trans-rectal ultrasound guided biopsy which finds these latent prostate cancers, many of which should not be treated.  Mainstream conventional treatment involves radical prostatectomy, radiation therapy, or hormonal castration.  The first two are associated with adverse effects of incontinence, and erectile dysfunction. Treatment with androgen blockade, (a form of chemical castration) is associated with increased mortality and osteoporosis.

One of the unmistakable impacts of wide scale PSA screening for prostate cancer has been the eradication of advanced cases over the past two decades.  For example, during my training years in the nuclear medicine department at Rush Medical School in Chicago in the 1970′s, we followed dozens of patients with metastatic prostate cancer on serial bone scans. (see left image)  This is rarely seen today.  The advanced prostate cancer case is a rare bird driven to extinction, seen only occasionally.

Stephen Strum, MD, an oncologist from Oregon writes in this March 2009 NEJM article, “The nature of the patient diagnosed with PC has dramatically changed since the introduction of PSA in 1987.  Almost gone are men presenting with advanced local or distant Prostate Cancer.”

Like the vanishing American Buffalo, these advanced metastatic prostate cancer cases have been hunted to the point of near extinction by the American PSA Screening Test.

The Vanishing Buffalo- Hunted to Extinction

Stanford’s Dr. Thomas Stamey, the first to advocate PSA screening in 1987, has come full circle, and no longer recommends PSA screening. Stamey found the abundance of advanced cases from the early years of PSA Screening are gone, and the PSA test has become useless. Stamey declares, “The prostate specific antigen era in the United States is over for prostate cancer”.

Stamey’s data shows there was a substantial decrease in correlation between PSA levels and the amount of prostate cancer – from 43 percent predictive ability in the first five-year group down to 2 percent in the most recent one.  “Our job now is to stop removing every man’s prostate who has prostate cancer,” said Stamey. “We originally thought we were doing the right thing, but we are now figuring out how we went wrong.”

In 1997, the American Cancer Society changed its position and no longer recommends screening under the leadership of Otis Brawley MD, their chief Medical Officer who declined PSA screening for himself, personally.  Otis Brawley, MD says.”twenty-three organizations of experts from the Canadian Urology Association to the American College of Physicians to the U.S. Preventive Services Task Force recommend against screening…the predominance of professional expert opinion is that (PSA screening) is unproven and should not be done.”

What is the Clinical Utility of PSA Test ?

According to Dr Bicker’s August 2009 article in Anticancer Research, PSA is now commonly regarded as an indicator of prostate volume, and is not independently diagnostic or prognostic in prostate cancer.  Even though mass screening of asymptomatic men with the PSA test is no longer recommended,  the PSA test remains a very useful tool in the diagnosis and follow up of prostate cancer. For example, the PSA is useful as a cancer marker to follow cancer recurrence, progression or regression after treatment.

Can We Tell them Apart?
The Dangerous Prostate Cancers from Insignificant Ones?

Gleason Score can help: Gleason Score is a histology grading pattern used to grade the biopsy sample.  Lower scores (one and two at left of diagram) are associated with better prognosis.  Higher scores (4 and 5 to right of diagram) are associated with worse prognosis with more aggressive behavior of the tumor. Diagram courtesy of Donald F Gleason MD PhD. How to Treat the Aggressive Cancers and Ignore the Others

One of the major problems with prostate cancer screening with PSA, is the inability of this test to differentiate the clinically insignificant cancers that don’t require treatment from the dangerous cancers that do.

Various authors have suggested refinements by using parameters such as PSA velocity, Free PSA ratio, and of course, the Gleason score, a form of histology grading, applied to prostate biopsy sample to provide this discrimination.  Using these refinements, some doctors such as Laurence Klotz have advocated Active Surveillance based on PSA velocity.  Dr Klotz offers treatment for cases having a PSA Doubling Time of 3 years or less (based on a minimum of three determinations over 6 months).  Others, such as Mark Soloway MD, feel that Gleason score  upgrade or histologic evidence of tumor aggression is the most important parameter, and have offered radical treatment if this is found at repeat biopsy.  The obvious goal is to identify and treat aggressive tumors before they invade the prostatic capsule and beyond.  This is not so simple and may require discovery of new biomarkers.

Do these new protocols and tools work any better than the old ones?  We don’t know yet. It may take another ten years to find out.

Results of Diet and Nutrition Program on PSA

In 20 patients with biopsy proven prostate cancer who had declined radical treatment,  Dr Wheeler’s herbal-nutritional supplement program reduced mean PSA from 6.8 ng/ml to 3.4 ng/ml over three years of follow-up. A detailed listing of patient PSA data from the study can be found on this page.

I would also add digestive enzymes, and optimizing vitamin D level with testing and supplementation, as well as optimizing Iodine levels with Iodoral would also be included in a typical prostate cancer prevention program.

PSA screening for prostate cancer has been a failed medical experiment leaving behind 1 million male victims treated unnecessarily for a type of prostate cancer that was clinically insignificant, providing little or no benefit in terms of lives saved.  Leaders in the field are now alerting us to the pitfalls, harms and limitations involved in PSA cancer screening.

Recognizing that there are 30,000 prostate cancer deaths per year, the urgent challenge is to identify and treat the aggressive cancers destined to kill the host, and avoid harming the other 7 million men representing a silent reservoir of biologically insignificant disease.  Hopefully, this will be the subject of future NIH funded research, so that another one million men in the future will be spared needless overdiagnosis and overtreatment.

References for this article can be found at the original source.

What to eat while detoxing