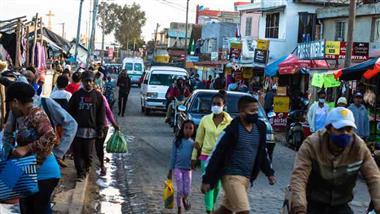 Whether or not lockdowns, shutdowns and other restrictive measures can work to lower the number of COVID-19 infections and deaths has been a topic of great debate since early 2020. As health experts look at global statistics, they have been stymied by the low rate of infection and death across the sub-Saharan African continent,1 compared to industrialized nations that used various lockdown procedures to contain the spread.

Across the world, countries have taken different approaches to address the spread of SARS-CoV-2. In one short documentary released by CAN films, they compare the COVID-19 outcomes in Scotland and Sweden.2 By March 2020,3 Scotland had implemented strict lockdowns and closed schools and other social venues. People were threatened with police fines if they went outside other than to exercise once a day, go to work or buy food.4

On the other hand, Sweden handled the pandemic differently than most of the globe and was initially vilified for looser restrictions and a lack of severe lockdown measures.5 In October 2020, TIME called the response a “disaster,”6 but data have shown that the death rate in Sweden was in line with other years.7 In other words, excess deaths that may have been attributed to COVID-19 were minimal.

Information compiled by CAN films showed the response in Sweden, which has nearly double the population of Scotland, had significantly less impact on the economy and health of their population, as well as nearly half the percentage of excess deaths as did Scotland.8 Scotland had three lockdowns, 64 school closures and a 54% increase in weight gain, while Sweden had no lockdowns, no school closures and zero weight gain.

Over the Thanksgiving 2021 break, media outlets broke the news of a new COVID-19 variant, dubbed Omicron, that was identified in South Africa.9 This variant is different in that doctors are reporting “unusual,” but mild symptoms, with fatigue being the most common complaint. In response, the rest of the world immediately instituted travel bans to and from South Africa.

Interestingly, the steps taken in Africa throughout the pandemic have varied depending on the country, yet the infection and death rate were relatively stable and low across the continent.10 Over the last year there have been reports of small areas in the world where the number of infections, deaths or case fatality rates have been significantly lower than the rest of the world.

For example,11 India’s Uttar Pradesh State reported a recovery rate of 98.6% and no further infections. On the other hand, the entire continent of Africa appears to have sidestepped the massive number of infections and deaths predicted for these poorly funded countries with overcrowded cities.

Early estimations were that millions would die when the pandemic swept across Africa. However, that scenario has not materialized. According to AP News,12 less than 6% of the continent is vaccinated and for months, the World Health Organization has called Africa “one of the least affected regions in the world.”13

In a busy crowded market outside Harare, AP News spoke with Nyasha Ndou, who carries a mask in his pocket. Hundreds of other people, mostly unmasked, were in the marketplace. Ndou explained the mask in his pocket:14

“COVID-19 is gone, when did you last hear of anyone who has died of COVID-19? The mask is to protect my pocket. The police demand bribes so I lose money if I don’t move around with a mask.”

According to data from WorldoMeter, the population of Africa15 makes up 17.46% of the world’s population16 Yet, AP News reports that the WHO data reveal deaths in Africa are 3% of the global total, while deaths in countries with better health care are much higher, such as 46% in the Americas and 29% in Europe.17

Nigeria has the highest population in Africa and the government has recorded just 3,000 deaths in the 200 million people who live in the country. In the U.S., AP News reports there are that many deaths every two or three days.18

Some Credit Early Lockdowns With Low Number of Infections

Across the world, countries and communities went into lockdown to supposedly help “flatten the curve” and slow the spread of the virus. Lesotho, the southernmost landlocked country in the world and surrounded by South Africa, locked down their country and their borders before a single person got sick.19

In March 2020, the country declared an emergency, closed the schools and went into a three-week lockdown. In early May, the lockdown was lifted, and the country recorded its first confirmed cases. The BBC reported in October 2020 that in a country of 2 million people they recorded 40 deaths in five months and approximately 1,700 cases.20

That number rose to 4,137 cases by January 2021 as citizens from South Africa were crossing the border during the holiday season.21 In addition to border crossings, the government had been releasing people early from quarantine over cost concerns.

However, experts believe thousands of people had crossed the border illegally because they were unable to afford to pay for their COVID-19 test.22 In response to the rising number of COVID-19 cases in January, the prime minister imposed a curfew on social venues such as bars and nightclubs at 8 pm.

While the quick action that some countries took to lock down their population may have slowed the spread of the virus in the early days, the SARS-CoV-2 is endemic. This means that it is in the environment and no amount of lockdown will eliminate the virus.

It also means that once lockdowns are opened again, the virus will continue to spread, just like flu and cold viruses. Countries like Lesotho that locked down early have experienced infections after the lockdown was lifted. The one advantage to flattening the curve and reducing the number of infections early in the pandemic was that doctors could have used the time to improve treatment protocols.

Dr. Vladimir Zelenko23 and the Front Line COVID-19 Critical Care Alliance24 are two examples of physicians and physician groups that developed treatment protocols during 2020 that have proven to be successful25,26,27,28 and reduce the number of individuals with severe disease or long-haul symptoms.

Factors That May Influence the Infection Rate

There are several factors that may influence the infection rates in Africa. In the video above, Dr. John Campbell points to the dramatic reduction in COVID-19 cases in Japan that began in August, just 12 days after doctors were allowed to legally prescribe ivermectin to their patients.29

Using Google Translate,30 Campbell learned Dr. Haruo Ozaki, chairman of the Tokyo Medical Association, had taken notice of the low number of infections and deaths in Africa where many use ivermectin prophylactically31 and as the core strategy to treat onchocerciasis,32 a parasitic disease also known as river blindness. More than 99% of people infected live in 31 African countries.

Malaria is one of the leading causes of death in many developing nations in Africa. The illness is triggered by a parasite carried by an infected female mosquito34 and characterized by flu-like symptoms. Delays in treatment increase the severity of the illness and the risk of death. According to the WHO35 there were 219 million cases of malaria diagnosed in 2017 and 92% of those were in the African region.

Finally, Artemisia annua, also known as sweet wormwood, is an herb used in combination therapies to treat malaria.36 It was used in traditional Chinese medicine for more than 2,000 years to treat fever. Today artemisinin, a metabolite of Artemisia, is the current therapeutic option for malaria. The plant has also been studied since the 2003 SARS outbreak for the treatment of coronaviruses, with good results.37,38

As the BBC39 points out, the average age in most African countries is much lower than in the rest of the world. Since many who have died are over the age of 80, and the median age in Africa is 19 years, infections are far less likely to result in death. Only 3% of the population is over age 65 as compared to 16.9% in North America40 and 19.2% in Europe.41

In addition, residential care facilities for the elderly are rare in most African countries.42 Weather may also play a part in who gets COVID: Early in the pandemic, researchers from the University of Maryland43,44 discovered there was a correlation between the spread of COVID-19 and temperature, humidity and latitude. They found the virus appears to spread better when humidity and temperatures drop.

How Does Vaccination in Sub-Saharan Africa Make Sense?

The low numbers of COVID-19 in the sub-Saharan African population continue despite a less than 6% vaccination rate. Meanwhile. Western nations’ vaccination rates are soaring, yet they struggle with rising infection and death rates. With statistics like this, why are Nigerian officials seemingly overlooking the country’s low numbers and health status by announcing they would be stepping up their immunization schedule, with hopes to give the shot to half the population before February.48

Put simply, their target is “herd immunity” in a population that is not suffering. Oyewale Tomori, is a virologist from Nigeria who sits on several WHO advisory groups. He believes the vaccination level does not need to be as high as it is in the West. Salim.

But Abdool Karim, an epidemiologist in South Africa who has advised the government in the past on COVID-19, disagrees. He is calling for an all-out vaccination program to “prepare for the next wave,”49 which negates what has happened in Africa in the last 20 months. He says, “Looking at what’s happening in Europe, the likelihood of more cases spilling over here is very high.”

So, as African countries which have had lower rates of infection and deaths since the start of the pandemic vaccinate more and more of their population, one can’t help but wonder: Once vaccination programs are underway, will the death rates climb as they have in other areas of the world where vaccination levels are high?50,51,52

And if they do, how will the “health experts” explain the sudden rising number of infections and deaths on a continent that has thus far avoided pandemic levels of COVID-19?

Now the truth is coming out