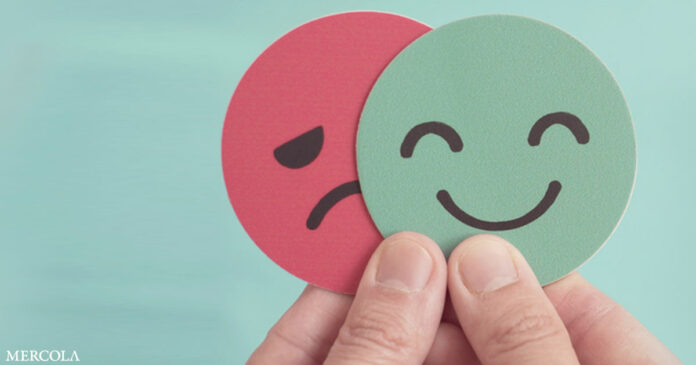 In Gallup’s 2022 Mood of the Nation survey, only 69% of Americans said they were very or somewhat satisfied with their overall quality of life — down from 84% in January 2020.1 It’s safe to say that many people could use a mood boost, and there are science-backed ways to do so, many of which involve movement. It’s well known that exercise provides benefits to mood, positively affecting anxiety, stress and depression.

Physical activity influences your mental health via a number of physiological and biochemical mechanisms, including effects on endorphins, mitochondria, neurotransmitters and the hypothalamic-pituitary-adrenal axis,2 which may play a role in mood disorders.3 There may be, however, certain movements in particular that can exact pleasurable feelings like joy.

Kelly McGonigal, Ph.D., a health psychologist, Stanford University lecturer, certified group fitness instructor and author of “The Joy of Movement: How Exercise Helps Us Find Happiness, Hope, Connection, and Courage,” created an 8.5-minute Joy Workout, which she shared with The New York Times.4

It includes a soundtrack with up-tempo songs, though she stresses that if you prefer other music that makes you feel good, just mute the songs and play what you like. The moves included in the workout are specifically designed to elicit joy. McGonigal explains:5

“The resulting eight and a half-minute Joy Workout … leads you through six joy moves: reach, sway, bounce, shake, jump for joy and one I named “celebrate” that looks like tossing confetti in the air. I based these moves on research and on the movements that produce the most joy in my classes, among people of all ages and abilities.

You should do the moves in any way that feels good — as big or as small and as fast or as slow as you like. If a movement doesn’t feel right, repeat a previous one or invent your own, moving in any way that feels joyful, powerful, playful or graceful. The video shows a standing workout, but you can also try it seated.”

Certain movements can be universally recognized as expressing basic emotions like anger, sadness, fear and happiness. Further, research has shown that when engaging in these movements, it enhances your feeling of the associated emotions.6

Using Laban Movement Analysis (LMA), a system used for understanding and describing movement, researchers created video clips of certified Laban movement analysts moving in combinations of movements designed to elicit only one emotion. In the case of happiness, for instance, combinations included movements described as jump, rhythmicity, spread (or expand), free and light, up and rise, and rotation.7

The video clips were shown to 62 male participants, who were asked to observe and rate the recognized emotions based on movements alone. Almost all of the happiness Laban clips were correctly recognized (81.3%), the highest of all the emotions tested (others included sadness, neutral, fear and anger).

In short, it was easy for the study participants to associate happiness with the movements they were viewing. According to the study, which was published in Frontiers in Psychology:8

Other research has found that when feeling joy, the torso tends to stretch, and arm lifting movements are associated with happiness, as are “up down repetitive hand actions” and jumping movements. Movements that involve reaching out of the body center and dynamic tension, such as rhythmicity, are also described as characterizing joy in a dance.9 McGonigal explains:10

“Researchers have identified several movements like this that are recognizable in many cultures as inspired by joy: reaching your arms up; swaying from side to side, like concertgoers losing themselves in the music; other rhythmic movements, such as bouncing to a beat; or taking up more space, like dancers spinning, arms outstretched.

These physical actions don’t just express a feeling of joy — research shows they can also elicit it.”

It’s long been suggested that physical activity induces a “feel better” effect, in which people have more pleasant feelings after exercise.11 It turns out it’s not always that simple, and exercise can encompass both positive and negative experiences. In terms of boosting mood and happiness, intentional movement that focuses on positive emotions may be more effective.

Indeed, a study published in the journal Brain and Cognition revealed that engaging in movements associated with a certain emotion enhanced that emotion and could play a role in regulating emotions.12 What this means is that moving in a way that feels joyful to you could make you feel happier.

Research published in Frontiers in Psychology also found that “happiness can be enhanced by executing a movement intervention based on LMA movement elements associated with happiness together with a DMTh [dance movement therapist], due to the resulting dynamic and interbodily feedback. The results support the role of movement in changing or influencing an emotional state …”13

Integrating specific movements into your day may be a simple, straightforward way to influence your mood for the better. In the aforementioned study, the following LMA movement elements were associated with happiness, as shown in the Frontiers in Psychology study’s Figure 1:14

Add a Dose of Nature

To increase the mood-boosting benefits of movement, take them outdoors. “Move outdoors, in a park or anywhere that gives you a dose of nature,” McGonigal suggests.16 Most people are disconnected from the natural world, and engaging in outdoor movement is a simple remedy.

Data from 19,806 participants in one study revealed that, compared to no nature contact, spending 120 minutes or more in nature during the previous week was associated with a greater likelihood of good health or high wellbeing.17 In fact, the study found that getting recommended levels of nature exposure weekly could result in a similar magnitude of health gains as achieving recommended levels of physical activity.18

Journalist Richard Louv, author of “Last Child in the Woods,”19 coined the term “nature deficit disorder,” which describes a lifestyle deficit that contributes to poor psychological and physical health. Louv suggested that humans’ alienation from nature led to “diminished use of the senses, attention difficulties and higher rates of physical and emotional illnesses.”20

The remedy? Make a point to spend time in green spaces as much as possible. If you don’t want to, it’s possible that you are one who could benefit most from this — a study published in Urban Forestry & Urban Greening found that people with the least positive attitudes toward green exercise get the greatest anxiety-reducing benefits from taking a 30-minute walk in nature.21

Sing or Turn on Some Tunes

Another way to take the mental benefits of movement to the next level is by adding music. “Move to music,” McGonigal wrote in The New York Times, “either through traditional exercise like jogging or cycling, or anything that gets your body moving — like air guitar, drumming or singing karaoke.”22 Music is associated with numerous mental health benefits, including:23

Singing while you move is another way to incorporate music into your daily well-being that is also known to elicit numerous positive physiological changes, such as:24

McGonigal also advised connecting with others as key to improving your mood with exercise. “Move with other people, in a class or a training group, or casually, with friends or family,” she wrote. “… Make movement fun through play or competition, in any active game or sport.”25 Ideally, spend time with others who are happy, since moods are contagious.

In 2008, researchers found that a friend living within a mile of a happy friend had a 25% greater chance of becoming happy over the 20-year study period.26 The neighbor of a happy person increases their likelihood of happiness by an impressive 34%, even more than the spouse of a happy person (who is 8% more likely to be happy).

Equally impressive was the finding that happiness can spread through social networks by up to three degrees, meaning friends of friends of friends can all benefit from one person’s rosy disposition.27 The truth is, some of us may find it easier to “be happy” than others, but there are science-backed ways to hack your mood. Engaging in purposeful, happy movements — ideally in nature and with other happy people — is among them, but is far from the only option.

Action for Happiness, whose members pledge to try to create more happiness in the world around them, has compiled 10 additional keys to boost your mood, which, based on the latest research, tend to make life happier and more fulfilling. They spell out “GREAT DREAM” and make a great place to start your journey to greater well-being:28