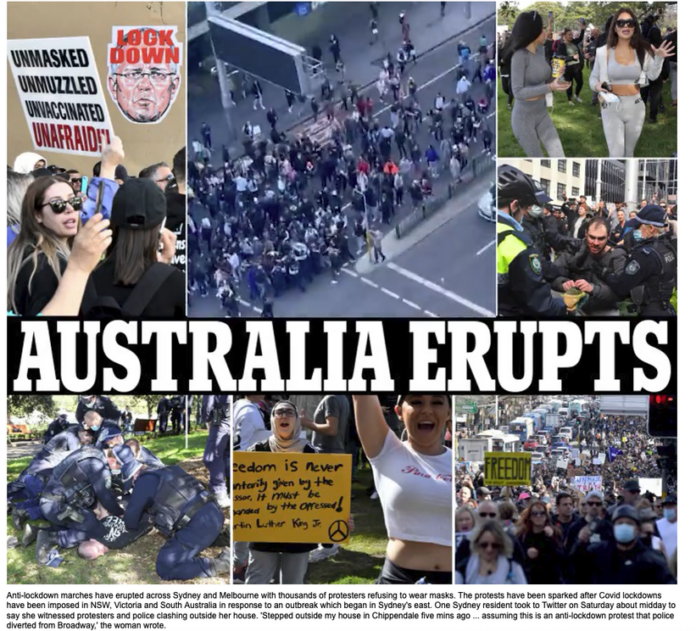 Powerful scenes show crowds stretching as far as the eye can see, with an estimated 40,000 people turning out in Sydney and Melbourne alone for peaceful rallies.

Tens of thousands of people marched through central business districts this afternoon, as part of ‘worldwide march for freedom’ events that are currently sweeping the world.

You can find compiled footage from the rallies, including a multiple-state livestream, all below.

Our friends at the Ultimate Podcast Report had rolling coverage of lockdown states!

See the full livestream of protests below:

The heart of lockdown, Sydney, thousands took to the streets today. People in Greater Sydney and its surrounds have been living in lockdown for exactly four weeks (now entering fifth).

A crowd stretching as far as the eye can see moved through the CBD towards Town Hall amid a massive police presence — estimates suggest as many as 15,000 people taking part in the march.

Footage on social media shows the demonstrators walking down Broadway, one of the main arteries through Sydney’s inner-west, as part of the worldwide rallies.

Entire families can be seen among the crowd and few people are wearing face masks, making their voices heard against lockdown madness, vaccine coercion, loss of livelihoods and more: As far as the eye can see!
Photo: Timothy Swanston

Protesters marched to Town Hall, where many stayed to have their voices heard: There were reports of police isolating protesters in small groups and arresting them, both before and after the larger rallies, however everything remained largely peaceful.

These rallies follow community demonstrations in Sydney’s south-west earlier this week, in which two citizens were arrested for taking their voices to the streets.

They were protesting an ongoing “police compliance operation”, which is choking the local regions placed in lockdown, many of which were already struggling before the restrictions.

NSW Police say the march is unauthorised due to public health orders and many on social media are not happy about the mass gathering.

Speaking at a press conference today the NSW Health Minister Brad Hazzard called the protests “silly” given the rising number of Covid cases in NSW.

“We live in a democracy and normally I am certainly one who supports people’s right to protest, but I actually think it is really silly,” he said.

Sydney was not alone in their efforts.

In Melbourne, thousands of protesters turned out in the central business district chanting “freedom”.

Initially, the crowd was blocked by a police barrier when gathering in the CBD: The beginning of the rally.
Video: marty_focker

However, shortly after, protesters broke through the barricades due to sheer numbers in the area and began marching down the street towards Parliament House.

Protesters held banners, including one that read: “This is not about a virus it’s about total government control of the people.” Thousands of Victorians take to the street!
Photo: Silva_Mark The health minister in Victoria has also since blasted the mass gathering — saying he is “beyond disappointed” at protest action.

He blasted the movement as “ratbaggery efforts” and said those taking part “are on the side of the virus”.

Police estimated 7,500 people gathered in the Botanic Gardens and marched through the city, many of whom were not wearing masks, in another successful Brisbane rally.

On the ground footage shows the movement was much bigger then reported! A number of speakers took to the stage, before demonstrators marched through Brisbane: No arrests were made and no fines handed out for not wearing a mask.

“Under current restrictions, persons outdoors are not required to wear or carry a mask as long as physical distancing is maintained,” a police spokesperson said in a statement.

We will add new developments from other states and regional locations here.

A car rally was planned for locked-down Adelaide, with police warning they will make arrests over unlawful activity. The state is in the middle of a seven-day lockdown.

Premier Marshall says this is ‘on track’ to be lifted on Tuesday.

Discussion: Despotism Down Under | Sunday Wire

The data is in — stop the panic and end the isolation