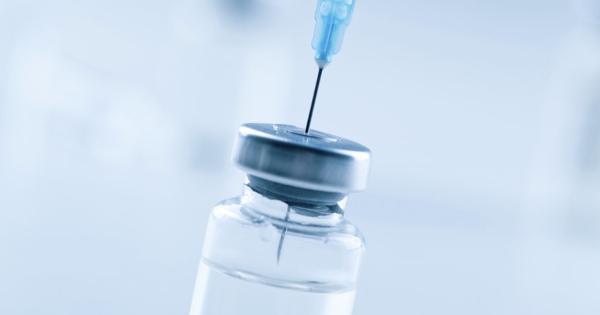 The Centers for Disease Control and Prevention (CDC) released new data today showing a total of 894,145 adverse events following COVID vaccines were reported between Dec. 14, 2020, and Nov. 12, 2021, to the Vaccine Adverse Event Reporting System (VAERS). VAERS is the primary government-funded system for reporting adverse vaccine reactions in the U.S.

Foreign reports are reports received by U.S. manufacturers from their foreign subsidiaries. Under U.S. Food and Drug Administration (FDA) regulations, if a manufacturer is notified of a foreign case report that describes an event that is both serious and does not appear on the product’s labeling, the manufacturer is required to submit the report to VAERS. 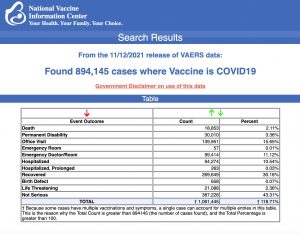 Every Friday, VAERS publishes vaccine injury reports received as of a specified date. Reports submitted to VAERS require further investigation before a causal relationship can be confirmed. Historically, VAERS has been shown to report only 1% of actual vaccine adverse events.

The most recent death includes a 16-year-old girl from Missouri (VAERS I.D. 1823671) who died after receiving her second dose of Pfizer.

FDA, CDC sign off on Pfizer, Moderna COVID boosters for all adults

The U.S. Food and Drug Administration (FDA) today authorized Moderna and Pfizer COVID boosters for all adults. The agency made its decision without input from its advisory committee, whose members, on Sept. 17, voted 16 to 2 against recommending boosters, citing a lack of long-term data and stating the risks did not outweigh the benefits.

Hours after the FDA announced its decision, the CDC’s Advisory Committee on Immunization Practices (ACIP) signed off with an unanimous endorsement.

The ACIP said 18- to 49-year-olds “may” get a booster, but people 50 and older should get one. CDC Director Dr. Rochelle Walensky is expected to clear the doses, which will allow boosters to be administered broadly to the general public.

Speaking for the FDA, Dr. Peter Marks, head of the agency’s Center for Biologics Evaluation and Research, said in a statement:

“The FDA has determined that the currently available data support expanding the eligibility of a single booster dose of the Moderna and Pfizer-BioNTech COVID-19 vaccines to individuals 18 years of age and older.”

Dr. Paul Offit, director of the Vaccine Education Center at Children’s Hospital of Philadelphia, and an FDA advisory panel member took issue with how the FDA arrived at its decision.

In an email to The Epoch Times, Offit said, “I think it would have been of value for the public to hear an open discussion about the need for boosters. I wish we had had the chance to discuss this.”

The FDA said it did not hold a meeting because “the agency previously convened the committee for extensive discussions regarding the use of booster doses of COVID-19 vaccines and, after review of both Pfizer’s and Moderna’s [Emergency Use Authorization] requests, the FDA concluded that the requests do not raise questions that would benefit from additional discussion by committee members.”

Pfizer and BioNTech requested authorization last week after submitting the results of a phase 3 trial involving more than 10,000 participants.

Moderna resubmitted its application for its 50-microgram booster dose for all adults just two days ago. The company said the FDA based its decision on the “totality of scientific evidence shared by the company,” including data that showed neutralizing antibodies had waned at about six months.

A 14-year-old Kentucky girl was mistakenly given J&J’s COVID vaccine, which is not authorized for anyone under the age of 18, International Business Times reported.

The girl was given the jab Oct. 16 at a vaccine drive-in at a high school in Covington.

The girl’s mother, Rolina Mason, said her daughter was reluctant to get vaccinated and wanted the J&J vaccine because it was only one dose. Mason agreed that the nurse could administer J&J, but didn’t realize it wasn’t authorized for use in children.

Mason said she trusted the nurse who told them that it was okay for her daughter to get it.

The health department contacted Mason a week later and informed her that her daughter should have received Pfizer’s COVID vaccine instead. Mason’s daughter reportedly experienced skin rashes after receiving the shot.

States bypass CDC, gave out COVID boosters to all adults before authorization

State officials from California to Maine encouraged and allowed adult residents to get COVID vaccine boosters despite recommendations by the FDA and CDC to reserve the shots for elderly and high-risk groups, CNBC reported.

California also told medical providers not to turn away any adults who requested a booster.

Arkansas, Colorado, Louisiana, Kansas, Kentucky, Maine, New Mexico, Vermont and West Virginia are also promoting widespread rollout of boosters for any fully vaccinated adult, with governors in Colorado and New Mexico signing executive orders a week before the FDA authorized the shots for the general population.

Gov. Jim Justice of West Virginia called for all adults in-state to get their boosters, adding that fully vaccinated residents would be “very foolish” not to register for the third dose.

Arkansas Gov. Asa Hutchinson said during a briefing Monday she wanted to make sure everybody 18 and over was eligible and encouraged to get a booster. Danyelle McNeill, a spokesperson for the Arkansas Department of Health, told CNBC in an email “the great majority of adults in Arkansas” were already considered high risk by the CDC before Hutchinson issued his recommendation.

Kentucky approved boosters for fully vaccinated adults on Wednesday, while Connecticut, Kansas, Louisiana, Maine, Massachusetts and Vermont expanded their booster programs this week before the FDA and CDC signed off, today.

At least two children in California are sick after a clinic administered the wrong doses of a COVID vaccine to 14 kids.

Denise Iserloth said she took her two children, ages 8 and 11, to a clinic where they received 20 micrograms of dosage instead of the recommended 10 micrograms.

Sutter Health said in a statement it warned parents of the mistake as soon as they learned of it, and contacted parents to advise them of CDC guidance. But Iserloth said she wasn’t made aware of the error until 10 hours after her children were vaccinated.

Both of her children stayed home from school on Monday with bad stomach aches, and her oldest child fell down twice in the hours following the shot, Iseroth said.

“I understand the mandate, I tried to comply with it, and my children now have been given a double dose and I don’t know the long-term side effects,” Iserloth said. “[…] It is unacceptable and negligent, completely negligent on their part.”

COVID hospitalizations on the rise among fully vaccinated

COVID hospitalizations and emergency room visits are on the rise among people who are fully vaccinated, according to Dr. Anthony Fauci, director of the National Institute for Allergy and Infectious Diseases.

“What we’re starting to see now is an uptick in hospitalizations among people who’ve been vaccinated but not boosted,” Fauci said Tuesday. “It’s a significant proportion, but not the majority by any means.”

In a White House COVID-19 Response Team briefing Wednesday, Fauci stressed the importance of vaccines and highlighted how well they work. At the same panel, CDC Director Walensky reported a decline in vaccine effectiveness among the elderly and residents of long-term care facilities, many of whom were the first to be eligible to be vaccinated last winter.

The current seven-day rate of COVID hospital admissions is about 5,300 per day, according to the CDC.

CDC admits to not tracking data on natural immunity

In response to a Freedom of Information Act (FOIA) request, the CDC said it has no record of an individual previously infected with COVID becoming reinfected or transmitting the virus to others — because the agency doesn’t collect that data.

The FOIA request, submitted Sept. 2 by attorney Aaron Siri of the Siri & Glimstad law firm on behalf of the Informed Consent Action Network, sought documents reflecting any documented case of an individual who: (1) never received a COVID vaccine; (2) was infected with COVID once, recovered, and then later became infected again; and (3) transmitted SARS-CoV-2 to another person when reinfected.

“A search of our records failed to reveal any documents pertaining to your request. The CDC Emergency Operations Center (EOC) conveyed that this information is not collected.”

According to Siri, the revelation that the CDC does not collect data on people who have acquired natural immunity to the virus raises questions about vaccine mandates, specifically how the government or employers can mandate vaccines for people who may not need them and who could be at a greater-than-average risk of experiencing an adverse reaction to the shots.

Children’s Health Defense asks anyone who has experienced an adverse reaction, to any vaccine, to file a report following these three steps.

The Children’s Health Defense Team is devoted to the health of people and our planet. Our mission is to end the childhood health epidemics by working aggressively to eliminate harmful exposures, hold those responsible accountable, and establish safeguards so this never happens again. We do what we do for many reasons, but the one thing we all share is our passionate belief that we have public health policies and practices that are harming our children. For the future good health of our children and planet, we call for more research and transparency. Visit us at www.childrenshealthdefense.org