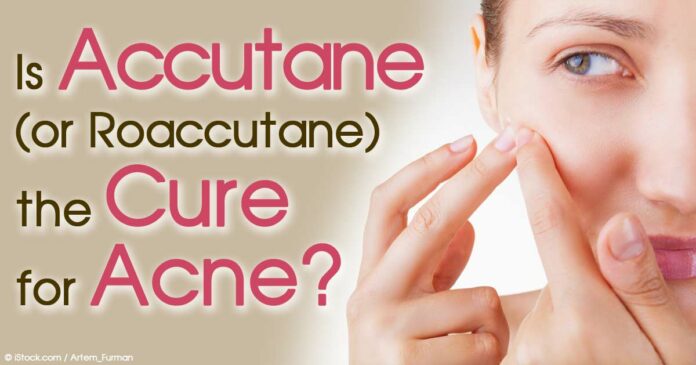 Up to 50 million Americans struggle with acne, making it the most common skin disorder in the United States.1

When it strikes during the teen years, it can lead to feelings of self-consciousness, embarrassment and depression. Many severe acne sufferers struggle with low self-confidence, feelings of alienation and social withdrawal as a result.

And it’s not only teens who are affected; one in five U.S. adults also suffers from acne, and for them the psychological toll is often no less severe.

Many are desperate for help to clear their skin, and if the typical face washes and topical treatments don’t work, they may gratefully accept a prescription for the acne drug Roaccutane (generic name, isotretinoin, and formerly sold as Accutane in the United States).

This is an extreme step, given that isotretinoin is easily one of the most dangerous drugs ever made. Yet, incredibly it remains the industry standard for treating severe acne. One leading UK dermatologist even recently spoke out to say it is being greatly overused.

More than half a million people worldwide have been prescribed Roaccutane, despite the fact that it’s intended to be used only as a last resort (and even then its use is highly questionable). But UK dermatologist Tony Chu said that often Roaccutane is being offered far more than that:2

“Roaccutane is grossly overused …I’ve seen patients who have been to see a local dermatologist to treat four of five spots and still been offered it … If you read the guidelines it should only be used for people who have severe acne.”

In the United States, it remains one of the most controversial drugs, and Swiss drugmaker Roche, manufacturer of Accutane, has spent most of this century in court defending itself against lawsuits from people whose health has been irreparably damaged by this menacing drug.

Roche has lost nine out of 13 lawsuits since 2007, and was ordered to pay more than $25 million in damages in 2010, plus another $18 million in 2012, to Accutane users who developed inflammatory bowel disease as a result of the drug. Due to generic competition and the exorbitant cost of defending personal injury lawsuits, Roche stopped selling the drug in June 2009.

However, the generic form of Accutane (isotretinoin) is no less deadly and remains available on the marketplace under the names Claravis, Sotret and Amnesteem. Aside from its links to inflammatory bowel disease, Accutane has been implicated as a cause of depression and suicide.

In 2004, brain scans showed that people taking Accutane suffer a 21 percent decrease in activity in the orbitofrontal cortex, a brain area known to mediate symptoms of depression.3 These brain changes may explain the depression, suicidal and aggressive behavior, and psychotic reactions reported by some Accutane users.

Is reducing your acne worth that? In light of this evidence and reports of suicide or suicide attempts associated with the use of isotretinoin, the U.S. Food and Drug Administration (FDA) stated:4

“All patients treated with isotretinoin should be observed closely for symptoms of depression or suicidal thoughts, such as sad mood, irritability, acting on dangerous impulses, anger, loss of pleasure or interest in social or sports activities, sleeping too much or too little, changes in weight or appetite, school or work performance going down, or trouble concentrating, or for mood disturbance, psychosis, or aggression.

Isotretinoin now has the strongest warning available for any drug category — and was given an FDA Pregnancy Category X rating, which means if you are taking isotretinoin and become pregnant, you are virtually guaranteed to be damaging your baby. Accutane is extremely teratogenic (causing damage to a fetus). According to the FDA:5

“If you are pregnant or may get pregnant, isotretinoin can cause birth defects, miscarriage, premature births, and death in babies.”

The risk is so well-established that anyone taking the drug must go through the FDA’s iPledge system, which was designed specifically to eliminate fetal exposure to this toxic drug. The system requires both the patient and the prescriber to enter in specific information on a monthly basis prior to the drug being dispensed. In the United States, a woman must:

According to the FDA’s iPledge system:6

“There is an extremely high risk that severe birth defects will result if pregnancy occurs while taking isotretinoin in any amount, even for short periods of time. Birth defects which have been documented following isotretinoin exposure include abnormalities of the face, eyes, ears, skull, central nervous system, cardiovascular system, and thymus and parathyroid glands. Cases of IQ scores less than 85 with or without other abnormalities have been reported. There is an increased risk of spontaneous abortion, and premature births have been reported.

If a drug is this toxic to a developing fetus, it certainly does make you wonder how it could possibly be safe for any living creature. Indeed, in addition to teratogenic and psychological adverse effects, Accutane (isotretinoin) users have also reported the following negative effects:

Did You Know Acne Can be Treated Naturally?

The root cause of acne is most likely not bacteria or genetics, but environmental factors — particularly your diet. Acne is much less of a problem in non-Westernized societies, where refined carbohydrates, sugar and fructose are consumed in much lower amounts. Solid evidence exists that diets high in sugar and refined carbohydrates are the primary CAUSE of acne.

When you eat grain carbohydrates and sugar/fructose, it causes a surge of insulin and an insulin-like growth factor called IGF-1 in your body.7 This can lead to an excess of male hormones, which cause your pores to secrete sebum, a greasy substance that attracts acne-promoting bacteria. Additionally, IGF-1 causes skin cells known as keratinocytes to multiply, a process that is also associated with acne.

Additionally, these very same foods — refined carbs, such as fructose, sugar and grains — will also increase inflammation in your body, which may trigger acne, and at the same time they will also wreak havoc on the makeup of your intestinal bacteria, which may also play a role.

This is why simply eliminating grains, sugars (particularly fructose), cereals, potatoes, corn, rice, pasta, processed foods, etc., radically improves acne for most people. Fruit contains a fair amount of fructose, so it should be consumed in very limited quantities if you are predisposed to acne. And fruit juices should be strictly avoided since the sugar is very concentrated in them. (Vegetable juices are great, though, especially green juices.)

Additionally, psychological stress may also alter the microflora in your intestines, which could therefore contribute to systemic inflammation that could exacerbate acne and other skin conditions. In one study, researchers noted:8

Although the frequency of SIBO in acne vulgaris has not yet been investigated, a recent report indicates that SIBO is 10 times more prevalent in those with acne rosacea vs. healthy controls. Correction of SIBO leads to marked clinical improvement in patients with rosacea.”

It’s actually well proven that stress can aggravate acne. One study involving college students found a connection between acne flare-ups and stress from final exams.9 Researchers found that subjects who had the most stress during examination periods also had the worst acne outbreaks, suggesting emotional stress from external sources is a significant factor. While it has been argued that the stress associated with acne is an effect of acne rather than a cause, the above researchers believe this evidence proved otherwise — that it’s the stress that is exacerbating the acne, not vice versa.

Ditch the Drugs and Try This Instead

No one wants to live with acne, but that doesn’t mean you have to resort to toxic drugs to clear your skin. Remember, your complexion is a reflection of your overall health. Don’t forget to incorporate these essential factors into your acne-busting plan:

If you don’t have access to regular UV exposure, the last option is an oral vitamin D3 supplement, accompanied by regular monitoring of your vitamin D levels with a blood test.