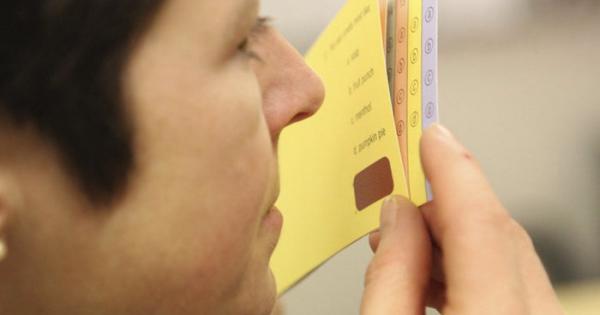 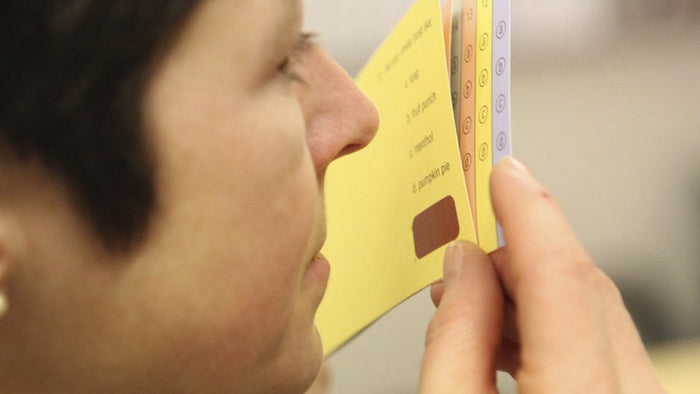 The loss of odor identification based on memory is an effective indicator of cognitive decline and Alzheimer’s Disease; a simple and inexpensive smell test is shown to be better than MRI in predicting early stages.

The ability to correctly identify odors may prove to be a more functional approach to identifying people at risk for early stages of Alzheimer’s disease (AD). Currently, physicians have to rely on expensive medical imaging (CT, MRI, or PET scans) to look for changes in the brain that are characteristic of AD. However, one of the problems with brain imaging beyond their cost is that it simply like taking a picture of the brain. Although sometimes these pictures provide valuable information, they do not evaluate the actual function of the brain.

Research has suggested that simple smell tests evaluating a person’s ability to identify odors may prove to be a practical screening tool for AD and age-related mental decline. Now a new study from Columbia University researchers has shown that a simple, inexpensive scratch and sniff test was shown to be better than an MRI measurement in predicting the early stages of AD.

The new study utilized the University of Pennsylvania Smell Identification Test (UPSIT). This simple test is commercially available for smell identification. It has become the gold standard of smell identification tests and has now been administered to about 500,000 patients so far. Developed by Dr. Richard Doty, the test has also been used as screening test in identifying early stages of AD and has been found to be superior to other non-diagnostic clinical measures in predicting cognitive decline. The loss of odor identification is based on memory and is not the same as a loss of the sense of smell.

Several other studies have also identified altered sense of smell in cognitive decline. For example, in a very simple approach to screening for early stages of AD, University of Florida researchers asked participants to smell a spoonful of peanut butter at a short distance from their nose. The participants had a confirmed diagnosis of early stage AD, some had other forms of dementia, while others had no cognitive or neurological problems. The results showed that patients with early stage AD had trouble smelling the peanut butter. Interestingly, when these patients blocked their right nostril, they had even more difficulty smelling the peanut butter. They typically were able to smell the peanut butter from 4 inches farther away with their right nostril than their left. The researchers found that this difference in smell between left and right nostril was unique to early stage AD.

In a more sophisticated study at the Mayo Clinic it was found that older subjects with an average age of 79 years old who had the worst test scores on a smell test were 2.2 times more likely to develop impaired cognition and memory over the three and a half year study. If at the beginning of the study a patient was already exhibiting memory problems and had a low smell test scores, they were more likely to progress to Alzheimer’s disease. The smell test used was more elaborate than the peanut butter test and included six food items and six non-food items.

The University of Pennsylvania Smell Identification Test (UPSIT) used in the new study involves scratching a surface, sniffing the odor that’s released, and identifying it from a multiple-choice list. The test consists of 4 different 10 page booklets, with a total of 40 questions. On each page, there is a different “scratch and sniff” strip embedded with a microencapsulated odorant. There is also a four choice multiple choice question on each page. The scents are released using a pencil. After each scent is released, the patient smells the level and detects the odor from the four choices. There is an answer column on the back of the test booklet, and the test is scored out of 40 items. The test is scored from 0 (no correct answer) to 40 (all answers correct). A low score indicates a decreased ability to correctly identify odors.

Again, the loss of odor identification is based on memory and is not the same as a loss of the sense of smell. The study included 397 patients with an average age of 80 from Manhattan, New York, who had undergone MRI and UPSIT and had no dementia at baseline. Researchers then followed these participants for 4 years. Analysis found that UPSIT and MRI predicted transition to dementia, but UPSIT was better. UPSIT was also able to predict general cognitive decline while MRI did not. In addition, when subjects scored very well on the UPSIT (score of more than 35 out of 40), almost nobody went on to get AD even though their average age was 80 years old.

These results mean that odor identification appears to be a better predictor of who will get AD as well as suffer from loss of mental function and memory (mild cognitive impairment).

A screening test is really only as good as the resultant next steps. In the case of AD and mild cognitive impairment, that next step should involve dietary and supplement strategies to improve brain structure and function. As a special gift detailing all of my suggestions for preventing AD and boosting brain power, click here to receive a special bonus publication

Get more information on natural options for Dementia and Alzheimer’s on GreenMedInfo.com’s research dashboard. Dr. Murray is one of the world’s leading authorities on natural medicine. He has published over 40 books featuring natural approaches to health. His research into the health benefits of proper nutrition is the foundation for a best-selling line of dietary supplements from Natural Factors, where he is Director of Product Development. He is a graduate, former faculty member, and serves on the Board of Regents of Bastyr University in Seattle, Washington. Please Click Here to receive a Free 5 Interview Collection from Dr Murray’s Natural Medicine Summit with the Top Leaders in the Field of Natural
Medicine. Sign up for his newsletter and receive a free copy of his book on Stress, Anxiety and Insomnia.
Disclaimer: This article is not intended to provide medical advice, diagnosis or treatment. Views expressed here do not necessarily reflect those of GreenMedInfo or its staff.

How Side-Sleeping May Protect Against Alzheimer’s