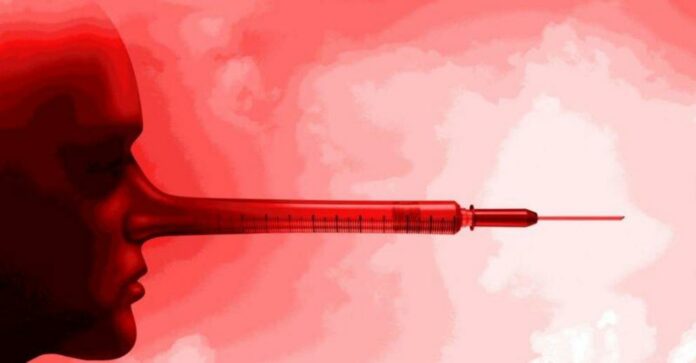 — a con as old as vaccination itself

People injured by COVID-19 vaccines may not realize it, but the pretense that post-vaccination injuries and deaths are just “sad coincidences” — far from being unique to the pandemic jabs — is a trick as old as vaccination itself.

So-called “fact-checkers” are having to work double-time to come up with ways to deny the undeniable fact that COVID-19 vaccines are causing injuries and deaths on a massive scale.

The shot pushers and their media enablers have taken cover-up tactics to absurd new heights by, for example, chalking up the rash of fatal heart attacks and overnight deaths in athletes and young adults to a fluky condition referred to variously as “sudden adult death syndrome” or “sudden arrhythmic death syndrome” (SADS).

What the COVID-19 vaccine-injured do not necessarily recognize, however, is the pretense that post-vaccination injuries and deaths are just “sad coincidences” — far from being unique to the pandemic jabs — is a trick as old as vaccination itself.

Facilitated by well-honed semantic and statistical flimflam, public health officials’ core strategy for perpetuating their fiction is to profess innocence — making unabashedly unsubstantiated pronouncements about vaccine safety, on the one hand, while on the other hand, declaring themselves “baffled” by ailments that emerge in the aftermath of a given vaccine’s rollout.

In an astonishingly frank and prescient book, “The Fallacy of Vaccination,” published in 1899, Dr. Alexander Wilder called attention to the “growing conviction” among “profounder thinkers and observers” that vaccination was not only “utterly useless as a preventive” but “actually the means of disseminating disease afresh where it is performed.”

Wilder noted, “whenever a vaccinator or corps of vaccinators set out upon a vaccinating crusade, there follows very generally a number of deaths from … maladies which have been induced by the operation. …”

Wilder also blew the whistle on the suppression and concealment of vaccine adverse events and deaths, describing a fellow physician’s urging of his “professional brethren to be slow to publish fatal cases of small-pox after vaccination” and outlining other shenanigans that sound all too familiar today:

“Occasionally … a death by vaccination is published, and immediately the effort is put forth assiduously to make it to be believed that it was from some other cause. The statistics of small-pox, purporting to distinguish between vaccinated and unvaccinated persons, are too often not quite trustworthy. Many persons who have been vaccinated are falsely reported as unvaccinated.

“Even when death occurs as the result of vaccination, the truth is concealed and the case represented as scarlet fever, measles, erysipelas [bacterial skin infection], or some ‘masked’ disease, in order to prevent too close questioning.”

The intentionality of the suppression seemed obvious to Wilder, who added, “Further argument is met by stolid silence, and by an apparent concert of purpose to exclude carefully all discussion of the matter from medical and public journals, and to denounce all who object.”

Similar sleight-of-hand was on full display during the recent Novavax-focused meeting of the Centers for Disease Control and Prevention (CDC) Advisory Committee on Immunization Practices.

In the ably summarized live-blog account by internist Dr. Meryl Nass — a member of the Children’s Health Defense scientific advisory committee — Nass noted CDC’s faking of COVID-19 data to hide the far-greater hospitalization and death rates among the COVID-19-vaccinated as compared to the unvaccinated.

Conveniently for the CDC, Nass noted, the only charts not “up to date by the day” were those presenting vaccination status versus outcome.

However, despite CDC’s “mumbo jumbo,” Nass pointed out, the agency was unable to hide the higher rate of myocarditis in mRNA-vaccinated males within a week of dose two — 75.9 times higher for 16- to 17-year-olds and 38.9 times higher in 18- to 24-year-olds.

Polio: another example of ‘mumbo jumbo’

With New York State recently reporting a case of “vaccine-derived polio,” and U.K. scientists declaring a “national incident” after allegedly finding “genetic sequences” of poliovirus in London sewage water, it appears public health authorities might be preparing to resurrect polio as the bogeyman du jour.

At first blush, the concession that nearly all modern paralytic polio cases are iatrogenically (medically) caused by the oral polio vaccine — shared by no less than the World Health Organization and CDC — seems unexpectedly and refreshingly candid.

However, public health authorities have no intention of conceding that the official story of poliomyelitis (where “myelitis” refers to spinal cord inflammation) is otherwise full of more holes than Swiss cheese.

There is, and always was, ample evidence to suggest that poisoning — whether by lead arsenate, DDT, or later, the toxic ingredients in polio vaccines themselves — is the most credible explanation for the paralytic symptoms and deaths that were labeled as “polio.”

In fact, early public health luminary Bernard Greenberg, founding chair of the biostatistics department at the University of North Carolina School of Public Health, testified before Congress that polio vaccination had “actually increased incidents of polio” and that “misuse of statistical methods had made the opposite seem true.”

Greenberg was referring to a change in the diagnostic criteria for “paralytic poliomyelitis.” implemented in the mid-1950s, which began to require at least 60 days of paralytic symptoms to earn the diagnosis, versus previously, just 24 hours of such symptoms.

As Greenberg did not hesitate to point out, the victory claimed by the first polio vaccines, which began to be administered around the same time, was entirely undeserved.

In the present day, “acute flaccid paralysis” and “acute flaccid myelitis,” which have a clinical picture virtually identical to polio, are the diagnoses of choice for childhood paralysis cropping up all over the world, including in the U.S.

In countries like India, where tens of thousands of children have developed acute flaccid paralysis, doctors explicitly linked the condition to oral polio vaccination. But decades of published reports also associate paralysis with other childhood vaccines, such as pertussis-containing and aluminum-containing vaccines.

In fact, historical reports of spinal cord inflammation, including not just poliomyelitis but other forms of myelitis, track closely with pediatric vaccination trends, and with the concurrent rise in the practice of pediatric injection.

Earlier generations of doctors even described polio cases that followed pediatric injections as “provocation paralysis,” while more recent generations of clinicians have noted the similarity between “polio” and injection injuries dubbed “traumatic neuritis.”

Transverse myelitis also has been making an appearance with COVID-19 vaccines.

Since the “polio” era, there are many other examples of diagnoses intended to obfuscate rather than elucidate vaccination as a cause of illness and death — and gaslight sufferers.

Among the environmental causes put forth as plausible triggers for the neuroimmune disorders labeled as “ASD,” heavy metal poisoning — principally via vaccination — is one of the most consistent contenders.

As for SIDS, the diagnosis first entered into vogue around the same time (in the early 1970s) that the vaccine load for children in the U.S. doubled.

Although the 1970s vaccine schedule appears restrained by today’s immoderate standards, young children of that decade not only began receiving 13 vaccines instead of seven, but also went from mostly receiving one shot at a time to often getting two at once, including five one-two punches of diphtheria-tetanus-pertussis (DTP) and oral polio vaccine — both subsequently taken off the U.S. market due to their troublesome adverse event profile.

Sadly, vaccine-injured individuals often are enlisted in the artifice.

Desperate for help, they discover they cannot gain access to the halls of medicine unless they self-censor any discussion of vaccination as the source of their health problems and instead acquiesce to “idiopathic” or “genetic” explanations, or punt to some of the more than 70,000 codes in the International Classification of Diseases-10 (ICD-10) — while eschewing the tiny handful of codes pertaining to “adverse effect of vaccines and biological substances.”

A new ICD code relevant to “new diseases of uncertain etiology or emergency use” was designated for “COVID-19 vaccines causing adverse effects in therapeutic use, unspecified.” However, it remains to be seen whether any health professionals will be brave enough to use it.

Meanwhile, as The Exposé satirically reported on July 24, “It feels like we can’t go a single week without hearing about the re-emergence, or emergence of a disease or ailment” — including a “mysterious” outbreak of hepatitis among children, the SADS phenomenon, monkeypox and, of course, polio.

All of these outbreaks, the journalists noted, “are ‘coincidentally’ occurring after millions of people worldwide have been injected with an experimental mRNA COVID-19 vaccine.”

As the recent New York and U.K. reports of vaccine-induced polio illustrate, these threats, whether real or imagined, are likely to mobilize further hostility toward the unvaccinated — including the New York communities fiercely ostracized a few years ago for rejecting measles vaccines for religious reasons.

In addition, the specter of a polio resurgence will be used to harangue the growing number of parents who, for whatever reason, have been increasingly deferring vaccination for their children.

In short, it would be naive to expect any breakthroughs in truth-telling from official corners any time soon.

Why We Do What We Do

The Children’s Health Defense Team is devoted to the health of people and our planet. Our mission is to work aggressively to reduce exposure to all sources of mercury, hold those accountable who failed to protect our planet and people from unnecessary exposure, restore health to those who have been harmed, and make sure this tragedy never happens again.

We do what we do for many reasons. Some of us have children who have been injured. Some of us have seen an injustice and feel the need to step in where others fear to tread. Some of us are focused on the demand for scientific integrity, others on improving the health of this, and future, generations. Some of us are eager to help any way we can. But the one thing we all share is our passionate belief that we have public health policies and practices that are harming our children. For the future good health of our children and planet, we call for more research and transparency.