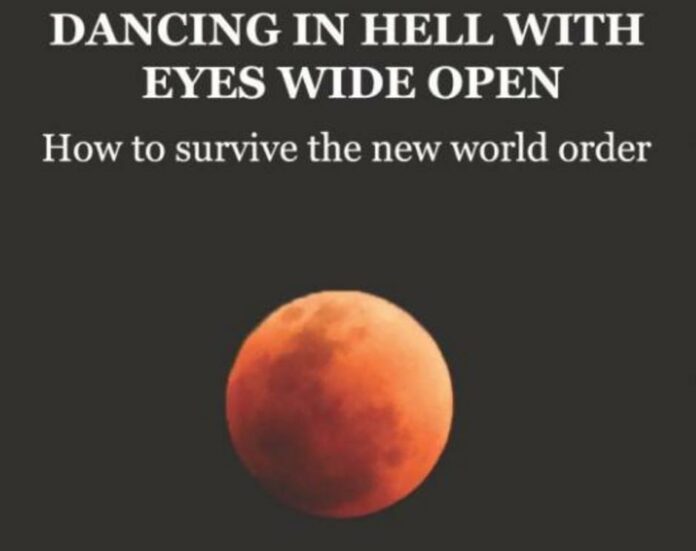 his is the title of my new book which was hard to write due to the nature of the subject matter. It’s much easier, and certainly more pleasant, to write on spirituality, and all those things that makes one’s life better. However, if we don’t talk about what’s actually happening in the world today and where we are being taken by the globalist elite, there will be no place to hide from the oppressive, Orwellian regime they have been assembling since the beginning of the COVID operation, and planning for decades.

I’m not excited to paint a target on my back. But my morals tell me I must make a stand. This is my proverbial line in the sand. As a father, I’m deeply concerned about the future of my children who may have to live in the world run by psychopaths; the human haters will make this a world not worth living if we don’t stop them.

As someone who isn’t “asleep at the wheel”, I feel responsible to convey my own worldview, regardless of how it’s received by the general public. I’m not looking for ratings; I do this because I must.

I’m not a whistleblower; I don’t have anything to share that isn’t already in the public domain. And that’s a good thing. It provides a certain protection. This book was conceived to inform people and let them draw their own conclusions. The facts are supported by footnotes; 235 links of supportive material are offered, which in combination with logical arguments, will ensure the reader’s world view expands and that the puzzle pieces join together.

I strongly encourage readers to check every link provided and add them to your research files.

Rejecting the truth doesn’t make the problem go away. If this were the case, rejection would be my full-time job. Deep down in your hearts, many of you know things aren’t as they appear, even if you might not be able to pinpoint the underlying problem. This book is a walk through a fog and confusion which humanity had to endure for a couple of years and ongoing.

We are at a crossroad. We either wake up and take the world back or we vanish. There is no third option, as you’ll agree after you read this tome. It’s that simple.

The murder of 93% of the world’s population is the first commandment of the Evil Gospels inscribed in the Georgia Guidestones, that were recently demolished as I was finishing this book. It begins by saying: “Maintain Humanity under 500,000,000 million in perpetual balance with nature.” Whether it was a false flag operation and the tomb of humanity was taken down to destroy the evidence placed in that field for 40 years, or whether it was an act of vandalism is not the point here. The fact is, that First Commandment envisions the depopulation of the planet to which we all belong, meaning the mass murder of 7.3 billion people.

The time has come for every awake person to step up and speak their minds clearly and loudly. Since we all are targeted for extermination, we might as well fight back to live a bit longer and create a better world for our kids.

Everyone is included in this global genocide. It doesn’t matter who you vote for, in which God you believe, the color of your skin, your social status, or your profession. These are just social constructs anyway — illusions that cause us to fight one another while the real enemies watch from behind the scenes. In fact, we are truly equal in a spiritual sense and we all want peace, happiness and freedom.

Our differences are largely trivial. Life matters. All life. Our rights derive not from governments but a higher power, be it God or the mysterious forces of evolution. We all born with the rights to life, liberty and the pursuit of happiness. These rights are currently under attack. The ugly face of the New World Order has emerged as the old world of freedom and democracy is being destroyed.

I was born in Ukraine when it was part of the oppressive Soviet Union. I see clearly that the exact same ideological virus that caused Russia’s socialist revolution in 1917 is being deployed in the west. Lenin and Trotsky were funded by financiers from Germany, Britain and the United States.

Anyone who lived behind the Iron Curtain and was subjected to the communist propaganda that persisted in Russia for 70 years before it collapsed can see the current agitprop for what it is. In the following video, Yuri Bezmenov, a KGB defector and an expert on Soviet propaganda, explains the four stages of the ideological subversion and demoralization of American society. It’s interesting to learn from him about an Indian guru who was sent to America to propagate socialism and distract people from being involved in politics via spiritual practices.

“Obviously, it’s more beneficial to the Soviet aggressors to have a bunch of duped Americans than the American who are self-conscious, healthy, physically fit and alert to the reality,” says Bezmenov in an interview with the Edward Griffin. https://www.youtube.com/watch?v=yErKTVdETpw

In my new book, I recount my own experience with an Indian guru in San Francisco. I address the spiritual bypassing so often seen in spiritual communities and individuals. Being an ex-cult member who experienced brainwashing first hand, I can easily recognize manipulation, deception and lies, regardless of the scale of their implementation.

Extreme ideology is more dangerous today because of the emergence of new technologies. Surveillance, tracking and tracing, were all implemented during the public health emergency. But even more invasive type of surveillance is still ahead; they call it “under-the-skin” surveillance, which is admitted by the Word Economic Forum.

What you do, where you go, and what you buy is no longer enough for the power-hungry elite; they now want to know what is happening inside your bodies and minds. Everything to do with the New World Order is hidden in a plain view. And if you know where to look, nothing remains a secret. My aim is to help you see it.

You might ask: “what’s the point of writing when we all seem to be rearranging the deck chairs on the Titanic?”

I believe there’s true hope, but only under certain conditions. A critical mass of awaken people needs to come together to turn things around.

The farmers in Holland are taking the lead in Europe. Following a government ban on meat production and requirements to reduce nitrogen as part of the climate change tyranny, farmers rose up. Like the Canadian truckers, these farmers should be supported by citizens around the globe who will starve to death when farms go out of the business. An attack on farmers is an attack on everyone.

What we currently observe in the Netherlands as I write this, is the Great Reset in action, as it was announced by Klaus Schwab — founder of the World Economic Forum (WEF). Climate change is the next COVID, designed to plunge the world into economic disaster. I document this in the book in detail. After sustaining biological and psychological attacks for 2.5 years, we’re now being assaulted with economic weapons such as inflation, food and energy shortages. It’s all by design. Vaccinology is a big topic throughout these pages. The current changes were planned decades ago and being executed with Swiss-watch precision.

If you take the time to review all reference material I’ve provided in the footnotes, your worldview will transform. Most people are unaware of the truth because of media lies and omissions. Wayne Dyer said it best: “The highest form of ignorance is when you reject something you don’t know anything about.”

It’s important to continue speaking out the truth regardless of how much pressure is placed upon us. If what we say is true, we need not be concerned with the outcome. Truth doesn’t need to be defended; truth is a lion that defends itself. Just let it out from the cage of your mind and let it run wild. This is what I have attempted with this book.

Ours is currently a dangerous world. We’re in an information war that requires our full attention; each individual that’s able must write, record videos or engage in public speaking, to make their voice heard. The world is where it is today in large part because for too long, too many people didn’t care about politics and decisions that affect everyone’s lives. We’ve become apathetic, dragged down by pharmaceuticals, dumbed down by the entertainment industry, and brainwashed by the mainstream media. Most of the populace didn’t see this coming, and some remain oblivious. We must awaken from our zombie-like state of consciousness now, or soon there will nothing left of democracy, freedom, civil and human rights.

I hope this book will be a stepping stone in your awakening. I did my best to provide readers with accurate information and deep reflections.

What you do with it is up to you!

Sergey Baranov is the author of ‘PATH’, a book that will be of interest to any spiritual seeker who seeks honesty above all else. Living in various countries and growing up in different cultures, Sergey gained an understanding of the essential, a core commonality of human experience that lies beneath the differences to be found in every culture. By walking different paths and seeing through their limitations, Sergey found shamanism as a unifying path for all people regardless of their cultural background. He currently lives in Peru with his family where he conduct monthly San Pedro retreats.

You can find out more in his book “Path”, available here on Amazon