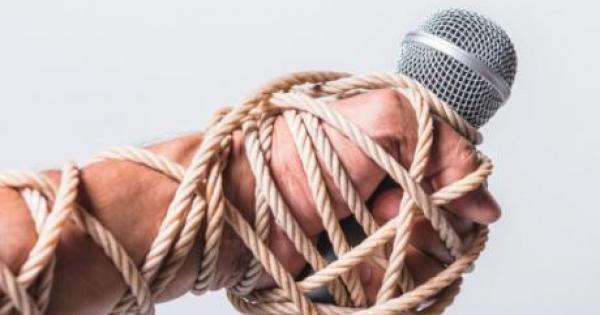 Watch out. The US Department of Homeland Security (DHS) released a “National Terrorism Advisory Bulletin” last week that equates free speech critical of federal government policy on Covid 19, 5G and other topics as “terrorism.”  And you know what happens to terrorists.

DHS claims, “Key factors contributing to the current heightened threat environment include: The proliferation of false or misleading narratives, which sow discord or undermine public trust in U.S. government institutions: For example, there is widespread online proliferation of false or misleading narratives regarding unsubstantiated widespread election fraud and COVID-19. Grievances associated with these themes inspired violent extremist attacks during 2021.”

They are careful not to specify any false or misleading narratives since specific claims could be refuted with troublesome things like facts. What violent extremist attacks were motivated by Covid 19 policy?  DHS does not say. If any had occurred in the reality-based world there would have been screaming headlines and media hysteria. Best to leave that type of thing sufficiently vague to avoid having to prove anything.

We have been told time after time during the past two years that facts about Covid claimed by the government to be false later turned out to be true. We learned that putting people with active cases of Covid in nursing homes was not a good idea, lockdowns really did not stop the spread of Covid and created vast new problems, the cloth masks we were forced to wear, and many are still wearing especially children in government schools, really don’t stop the spread of Covid, and the shots really do not stop the transmission or contracting of Covid. How do we know that? Plenty of “fully vaccinated” people are getting omicron, and  Pfizer, Johnson & Johnson, and Moderna said so in the documents used  to license the injections submitted to the Food and Drug  Administration. All of these are now facts acknowledged by the federal  “experts” but many people and institutions, like the giant social media companies, still consider them mal or mis or dis information. And speaking the truth now is terrorism.

Please click here  Biden Department of Homeland Security equates free speech with terrorism to send messages to President Biden, your two US Senators, and your member of the House of Representatives asking them to explain how free speech against demonstrably ineffective and damaging public health policies is the equivalent of terrorism.

As usual foreign actors are involved, “The United States remains in a heightened threat environment fueled by several factors, including an online environment filled with false or misleading narratives and conspiracy theories, and other forms of mis, dis and mal-information (MDM) introduced and/or amplified by foreign and domestic threat actors.”

So unnamed “foreign actors” (no doubt the Russians) are spreading this terroristic “MDM.” Just like they interfered with the 2016 presidential election.  But, again, where is the evidence? Are Robert Malone and Peter McCullough agents of the Kremlin? Are Del Bigtree and Robert F. Kennedy, Jr. Putin’s puppets? If DHS has evidence, let’s see it.

DHS continues, “While the conditions underlying the heightened threat landscape have not significantly changed over the last year, the convergence of the following factors has increased the volatility, unpredictability, and complexity of the threat environment: (1) the proliferation of false or misleading narratives, which sow discord or undermine public trust in U.S. government institutions.”

The fact that every government institution involved in the Covid response have continuously lied and misled us since late 2019 on every aspect of the plague is not responsible for undermining trust in our institutions, the fault for that lies with those who say the emperor has no clothes. Government collusion with massive drug companies that have decades long track records of serial felonies cheered on by fawning stenographers in the legacy media are not the problem, you are the problem.

DHS believes that the winding down of Covid -19 restrictions will lead to violence, “As COVID-19 restrictions continue to decrease nationwide, increased access to commercial and government facilities and the rising number of mass gatherings could provide increased opportunities for individuals looking to commit acts of violence to do so, often with little or no warning.”  Again, our crackerjack anti-terrorist g-men leave it to our imaginations to conjure how ridding ourselves of masks, lockdowns, mandates and vaccine passports will lead to violence when the policies themselves are acts of violence.

A few weeks ago, irate parents attending school board meetings were identified as a potential terrorist threats by the US Department of Justice. Now it is people who disagree with federal Covid policy, who have been shown to be correct time and time again.  These days the Biden administration defines “terrorism” as disagreeing with their policies.

At the same time, we have states like New York creating new rules, not laws, that allow the governor to arrest and indefinitely imprison suspected health threats without the need for any judicial process or review. And to our north yesterday Canadian Prime Minister Justin Trudeau for the first time ever in Canadian history invoked the Emergency Act which gives him extraordinary powers he intends to use to quell the peaceful trucker protests against his program of safety totalitarianism. Will Biden be far behind?

Please share this message with friends and family, and please share on social media while we still can.