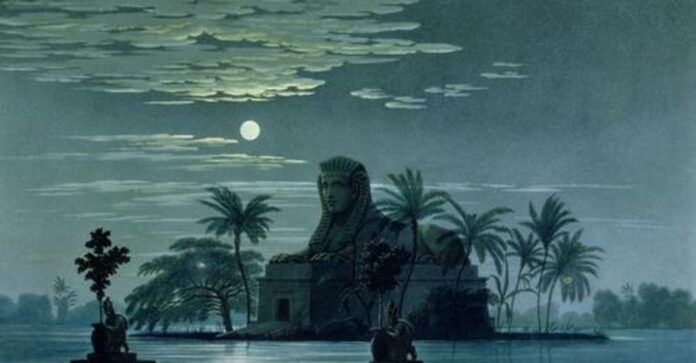 This article explores the possibility that the Great Sphinx in Egypt was conceived as a temple to a lunar deity in the form of a lion facing the rising of a full moon circa 21,000 BCE. We hypothesize an alignment at the fall equinox with the sun setting behind the Sphinx instead of in front of it at the spring equinox as Bauval and Hancock have proposed. Based on predictions derived from Charles Hapgood’s theory of earth crustal displacement, this hypothesis places the origin and early history of the Sphinx in the tropics where heavy rainfall over time could have eroded the original structure so as to appear as it does today.

The Sphinx is thought to have been built by the 4th-dynasty pharaoh Khafre, around 2500 BCE. Inspired by the research of Schwaller de Lubicz, John Anthony West believed it to be much older. West along with geologist Robert Schoch proposed a dating of 5000 BCE based on indications of water erosion, water erosion that could only have occurred when the climate was wetter. Graham Hancock and Robert Bauval suggested the Sphinx was built circa 10,500 BCE in the astrological age of Leo. They believed the symbolism of the Sphinx facing the sun as it rose on the first day of spring “mirrored” the alignment of the sun in the sky with the constellation Leo at that time. West later went on to propose an even earlier date of 36,000 BCE during the time of the legendary predynastic rules of Egypt.

Evidence of water erosion on the Sphinx suggests that it once existed within a much wetter environment. Today, the climate in Lower Egypt is dry due to it being north of the tropic of Cancer within the range of latitudes in the northern hemisphere that has the least amount of rainfall. Climate zones relative to the Hudson Bay pole. Egypt would have been located in the tropical zone between the red and orange lines.

Charles Hapgood proposed that ice ages and other climate events were due to displacements of the earth’s crust that shifted the geographic location of the North Pole. As the pole shifts, so too do climate zones. If the North Pole were in Hudson Bay before the latest crustal displacement, which Hapgood estimated occurred 12,000 to 18,000 years ago, Egypt would have had a warm and wet climate.

Before Atlantis considers the archaeological implications of Hapgood’s theory, in particular, that certain ancient sites were aligned to previous locations of the geographic pole. In Giza, if the geographic pole were in Hudson Bay, North would have been about 30° west from its current direction.

The three great pyramids and associated temples in Giza are accurately aligned within fractions of a degree to north. Much of the surrounding area contains later-day tombs, settlements, and other structures that are similarly aligned although not as accurately. Like the pyramids, the Sphinx also appears to be aligned to the cardinal directions.

An area surrounding the Sphinx on the east side of the Giza Necropolis contains structures that are aligned differently. The Temple of Amenhotep II northeast of the Sphinx is rotated about 45° clockwise from the cardinal directions. The temple was built over the then yet to be revealed temple in front of the Sphinx that was discovered after his son Thutmose IV excavated the Sphinx around 1400 BCE. The Pyramid of Khentkaus I is a two-stepped tomb south of the Sphinx that was constructed during the 4th-dynasty. The tomb, built in two phases coinciding with its two steps, was originally known as the fourth pyramid of Giza. It is unusual in that unlike the other three Giza pyramids this structure is misaligned by a considerable amount, about 6° west of north.

What is interesting about the Hudson Bay pole hypothesis is that it explains the alignment of these two structures in a simple way. If the North Pole were in Hudson Bay, the Temple of Amenhotep II would be aligned in the direction of minor lunar standstills. The Pyramid of Khentkaus I and neighboring structures east and west would have been aligned in the direction of the winter solstice sunrise/summer solstice sunset relative to the Hudson Bay pole. Even more interesting, we find that the direction of major lunar standstills circa 21,000 BCE corresponds to due east today. In other words if the Sphinx were originally built in alignment with the moon at this time, after the pole shift from Hudson Bay it would now appear to be cardinally-aligned. Pyramid of Khentkaus I is aligned to solstices relative to Hudson Bay pole.

Alignments to the Moon

According to Wendell  Phillips, the “Indiana Jones” of his time, “the moon was the chief deity of all the early South Arabian kingdoms – particularly fitting in that region where the soft light of the moon brought the rest and cool winds of night as relief from the blinding sun and scorching heat of day.”

Sites dedicated to moon gods exist throughout Arabia to the east. The ancient cities of Timna and Mar’ib along the southern border of the Rub’al Khali are aligned in the direction of minor lunar standstills. The Temple of Awwam in Mar’ib, dedicated to the moon god  Ilumquh is aligned to sun and moon relative to the Hudson Bay pole. Structures in the ancient town of Shabwa to the east are also aligned to the moon relative to the direction of the Hudson Bay pole. (See a previous article for a discussion of these sites.)

In considering the widespread worship of the moon in this part of the world, was the Sphinx, once thought to have been the representation of a lion, actually a shrine to a lunar deity?

Lions do not live in arid desert regions but in warm tropical savannas. Like most predators, they sleep during the day and hunt at night. One can argue that the symbolism of a lion sitting upright at twilight with the sun setting behind it in the constellation Leo, facing the moon as it rises in the opposite direction, is perhaps even more compelling than that of a lion facing the sunrise, especially in the desert.

Similar to Marco Vigato’s argument that the Giza pyramids could have once been earlier predynastic mastabas or similar structures that were later expanded into pyramids, could the base of the Pyramid of Khentkaus have been built even earlier before the last pole shift aligned to the solstices relative to the pole at the time, the Hudson Bay pole?

Clearly, the Temple of Amenhotep II built over the Sphinx Temple has nothing to do with the origin of the Sphinx itself. However, its presence in Giza together with similarly aligned sites in Upper Egypt suggests the Egyptians aligned structures to the sun and moon relative to the current and previous geographic poles and so could have aligned the Sphinx in this manner as well.

The Temple of Karnak, Hypostyle Hall, Temple of Thutmose II, and Temple of Ramesses II are all lined up in the direction of the winter solstice sunrise/summer solstice sunset relative to the current pole in the Arctic. The Mortuary Temple of Thutmose III and the Colossi of Memnon in Thebes are also aligned in this direction, about 26° south of east, along with the Mortuary Temple of Hatshepsut. The Mut Temple in Luxor is aligned in a direction a few degrees away that is toward minor lunar standstills.

The Temple of Amenhotep II in Giza is aligned in the same direction as the Ramasseum in the Theban Necropolis more than 300 miles away. The Mortuary Temple of Thutmose III in Thebes is aligned to solstices relative to the Hudson Bay pole as is the Pyramid of Khentkaus. Why did father and son rulers Thutmose III and Amenhotep II align temples in Giza and Thebes to directions that have no obvious reference other than to the Hudson Bay pole?

Over 60 temples, mostly in Upper Egypt, are aligned to previous hypothesized locations of the North Pole. A study of how these alignments correlate with different rulers could provide further insight into the question of whether the structures were built over earlier sites or oriented in “sacred directions” in acknowledgment of mythical rulers or “gods” of past ages.

Featured image at the top of the article is a painting by K. F. Schinkel entitled “Garden scene with the Sphinx in moonlight.”

Mark Carlotto is an aerospace engineer with over thirty years of experience in satellite imaging, remote sensing, image processing, and pattern recognition. He received a Ph.D. in Electrical Engineering from Carnegie-Mellon University in 1981 and has published numerous technical articles and books. Dr. Carlotto contributed extensively to the investigation of the Face and other structures in the Cydonia region of Mars, analyzed anomalous objects in STS-48 and STS-80 space shuttle videos, and participated in a recent study of unusual surface features on the far side of the Moon. In his latest book, Before Atlantis, Mark Carlotto draws from his unique background and experience to propose new answers to basic questions concerning human origins, ancient technology, and archaeological enigmas.

The Drudge Report effect: a dumpster of social engineering and mind control